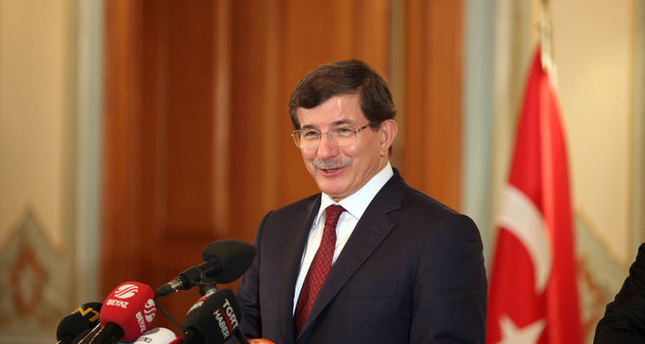 In his first televised interview as Turkish prime minister, Ahmet Davutoğlu said that the overall aim of the Gülen Movement was to erode Turkey's determination to become a key player on global issues

Ahmet Davutoglu, who was elected as Justice and Development Party (AK Party) chairman and prime minister after Recep Tayyip Erdogan took the presidential seat by a popular vote, said late on Thursday that the Dec. 17 and Dec. 25 operations orchestrated by the Gülen Movement with an aim to overthrow the Turkish government are certain circles' efforts to discredit the new Turkey's objectives and the determination to transform the country into an influential player on global issues.

In his first televised interview as prime minister, which was aired by the Turkish Radio Television Corporation (TRT), Davutoğlu made striking remarks on the infiltration of the Gülen Movement, led by U.S.-based imam Fethullah Gülen who lives in self-imposed exile in Pennsylvania, into key governmental positions.

Davutoğlu said that the reason behind the Dec. 17 and Dec. 25 operations was to erode votes for the ruling AK Party in the March 30 local elections, Aug. 10 presidential election and the upcoming 2015 general elections and added that these gangs in key government bodies tried to create turbulence in Turkey just like what happened in Egypt. "The aim of the Gülenist infiltration was Turkey's 12 years-long energy and power, not the ruling party and Erdoğan,"Davutoğlu said.

Highlighting the AK Party's reforms of the last years, "Our [AK Party] aim is to turn Turkey into a political agent in foreign politics, too. In domestic politics, our aim is to make citizens of Turkey agents of the country regardless of their stature, region, ethnic origin or sect," Davutoğlu said.
Davutoğlu added that political agent change is the main reason behind developments in the country such as democratization and the reconciliation process between Ankara and Kurds that started with an AK Party initiative.

Davutoğlu reiterated that several unsolved taboos prevented previous Turkish governments from negotiating on certain issues such as the 1915 Armenian incidents, the Kurdish and Alevi issues and that only elites in the state were able to be touch on these issues, not those politicians elected by the nation. The prime minister further added that with the AK Party government, the citizens of Turkey had their right back to speak about those redlined issues.

Stressing that the new government program that was announced last week and presented for a vote of confidence on Saturday is not a temporary program, Davutoğlu remarked that the objective of this program is to put Turkey's 2023 vision into practice and form a new constitution.
On the reconciliation process between Ankara and the Kurds, Davutoğlu said that the related government figures are set to come together every 15 days to discuss the latest developments in the reconciliation process.

Expressing the importance of ensuring public order, Davutoğlu said that if there is no public order, there is no reconciliation process, either. Davutoğlu highlighted that the support of social psychology to the reconciliation process should continue by adding, "We [the government] aim to reach a point as soon as possible in which disarmament will be ensured and any violence will be prevented."

He also pointed out that transparency is of the utmost importance in the process and that the government would never let pro-PKK provocations take the forefront in the reconciliation process. Referring to the ongoing regional crisis, Davutoğlu reiterated that despite the crisis in the region, Turkey is working to end the decades-long conflict with the reconciliation process.

On the ongoing conflict in the Middle East, Davutoğlu said: "There are exact ethnic and sectarian clashes on our [Turkey's] borders. We have spent serious efforts for four years to avoid sectarian clashes in Syria and Iraq. … Turkey was one of the first to warn about ISIS as soon as the crisis began."