Turkey dismisses claims of being a 'Jihadist highway' 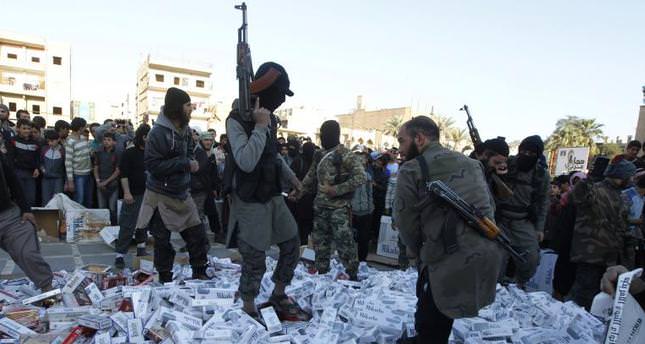 Rather than asking Turkey to catch ISIS militants going to Syria, the West needs to stop recruitment in their backyards, said President Erdoğan

There is an ongoing accusation targeting Turkey in several foreign and domestic media outlets that Turkey has become the primary route for foreign jihadists who join the wars in Syria and Iraq. Western countries are criticizing Turkey for not taking preventive measures; however, a recent study from the U.K.-based Soufan Group, which offers strategic security intelligence and research, shows that around 2,500 foreign jihadists have come from Western Countries.

After Islamic State of Iraq and al-Sham (ISIS) videos of the brutal beheadings of Western journalists, prominent media outlets started to pay a lot of attention to the extremists and radical groups in the ongoing wars in Middle East, particularly in Iraq and Syria. Apparently, Western media has questioned Turkey's actions, considering the Turkish support for opposition groups in the Syrian civil war.

Although Turkey is allegedly the primary route for opposition groups, Turkey's approach to extremist groups is decisive - the Turkish government added al-Nusra Front and ISIS to their terrorist organization list in early October of 2013.

Sources close to the Prime Ministry responded to the Wall Street Journal's accusations, which described Turkey as a "jihadist highway," as complete slander. "Turkey is a country that has a [822-kilometer] border with Syria and welcomes more than 35 million tourists year-round. Of course it is hard for us to control passing through the borders; however, scrutiny has increased, and our border security has been strengthened.

Yet, our counterterrorism partners in the West do not share crucial information or sufficient intelligence with us regarding foreign jihadists that came from their countries," an official from Prime Ministry told Daily Sabah.

Despite Western countries and media blaming the Turkish government for letting jihadists easily pass through their borders to join the ongoing wars in the Middle East, sources from the Prime Ministry claimed the opposite. It has been recommended that Turkey form a risk analysis committee exclusively on extremist and radical groups that have tried to sneak into the conflict areas from Turkish borders and airports. In a fourmonth period, of the 479 people identified as suspicious, 445 have been interrogated for a second time, and 107 of them were not allowed to enter Turkey, according to the source.

Furthermore, Interior Ministry sources also said that after checks and controls at border crossings, around 6,000 people were denied entrance into Turkey, and around 1,000 people have been deported since 2014.

The Interior Ministry also reiterated their concern about Western countries' weak precautionary measures regarding extremist citizens in their countries. An expert from the ministry pointed out the imprudence of European countries about their citizens who are going to join jihadist groups.
They claimed that a citizen from a European country (sources do not want to emphasize which one) tried to cross the Turkish border with pieces of an AK-47 and ammunition and a German family that has been watched by the German government due to suspicion of terrorist involvement, tried to cross over the Turkish border with explosive materials.

Turkish officials emphasized that Turkey is the one who should complain about the jihadist problem because their efforts to crack down on foreign jihadists seem insignificant in the absence of security measurements by its European allies.

Meanwhile, the Turkish government urged Europe and the U.S. early on that if there is no collective intervention in Syria, radicalism would rise gradually as long as the war continues. In recent days, former U.S. Secretary of State Hillary Clinton criticized the Obama government for not taking necessary actions against Bashar al-Assad.

The failure to help build up a credible fighting force of those who were the impetus for the protests against Assad, including Islamists, secularists and everything in the middle, left a big vacuum, which the jihadists have now filled, Clinton said.