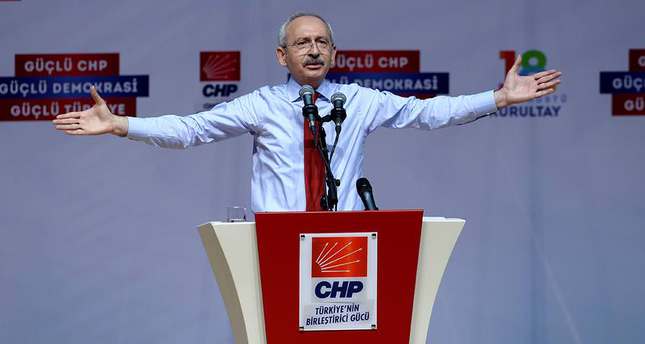 by AA Sep 05, 2014 12:00 am
Turkey's main opposition leader, speaking at the party's extraordinary congress in Ankara on Friday, denies claims that he is leading the party to the right.

Kemal Kılıçdaroğlu agreed to hold the congress after he was challenged by several of the party's lawmakers following a disappointing result in the presidential elections in August when the opposition joint candidate Ekmeleddin Ihsanoğlu, came second but with a lower than expected number of votes.

"Respecting any identity or belief does not mean shifting to the right," Kılıçdaroğlu told delegates.

Kılıçdaroğlu added that he loves everyone without making any discrimination between right and left.

Expressing the importance of democracy and freedom, Kılıçdaroğlu said that he defends the rights and interests of public.

Speaking at the congress, Ince said "When I first heard the name 'Ihsanoğlu', I saw 100% failure against Erdoğan."

Adding that he does not have any individual problem with Kılıçdaroğlu, Ince criticized his policy, saying "Kılıçdaroğlu presented Erdoğan with the presidency."

Ince announced in August that he would challenge Kılıçdaroğlu to lead the party, which was founded by M. Kemal Atatürk in 1923.

On August 10, people went to the polls to elect Turkey's president for the first time. Erdoğan won the election receiving 51.79 percent of the vote, while his rivals Ekmeleddin Ihsanoğlu received 38.44 percent and Selahattin Demirtas won 9.76 percent.