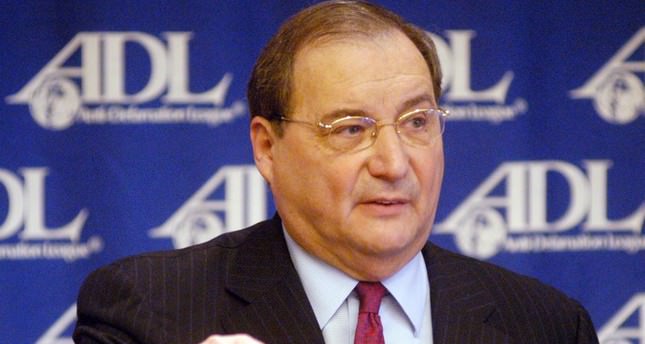 by Ragıp Soylu Sep 07, 2014 12:00 am
The New York-based Anti-Defamation League issued an open letter on Friday to President Recep Tayyip Erdoğan, praising his leadership in affirming Turkey's commitment to providing an inclusive society for Jewish citizens.

The letter was brought to public attention, while an ADL-backed resolution, H.R. 707, is waiting in the U.S. House of Representative, targeting President Erdoğan for his comments comparing Israeli crimes in Gaza with the barbarism of Hitler.

"The ADL received via the Turkish embassy in Washington, D.C. a translation of a two-page letter from Mr. Erdoğan (dated Aug. 21 addressing ADL President Abraham "Abe" Foxman] in which he assured the ADL that the Turkish Jewish community was safe and "need not be concerned" with public sentiments caused by the events in Gaza or "feel vulnerable on the grounds of anti-Semitism," the press release reads.

"As I have repeatedly stated on numerous occasions, including in my speech after the presidential elections, which I am pleased has not escaped your attention as well, our Jewish citizens – with whom we have lived together for more than 500 years – are our equal citizens that fully enjoy all the rights and freedoms this country presents. The safety of the members of the Jewish community is under the guarantee of our state, and it has to be known that action against them will not be tolerated under any circumstance. We are grateful for the contributions of our Jewish citizens to our country," he added.

Erdoğan emphasized that whether practicing Judaism or any other religion to feel enmity toward someone just because they are different has never and will never gain acceptance in Turkey. The president also pointed out that since 2008 Turkey has been an observer country in the International Holocaust Remembrance Alliance.

President Foxman of the ADL in response to this letter issued a response, saying: "We were heartened by much of what you wrote to us in your Aug. 21 letter. You clearly conveyed your steadfast opposition to expressions of anti-Semitism in Turkey and a dedication to promoting a Turkish society based on non-discrimination and an acceptance of religious, ethnic and other differences. We welcome and deeply appreciate your ongoing commitment to the safety and security of the Turkish Jewish community."

The two men differ on the Israeli attacks on Gaza. Erdoğan said that obstructing criticisms to that end on the grounds of anti-Semitism would prevent the culture of democracy from taking root in the Middle East.

Foxman dismissed this opinion and considered the suggestion as "unfounded."