Davutoğlu calls on opposition parties to be more involved in Parliament 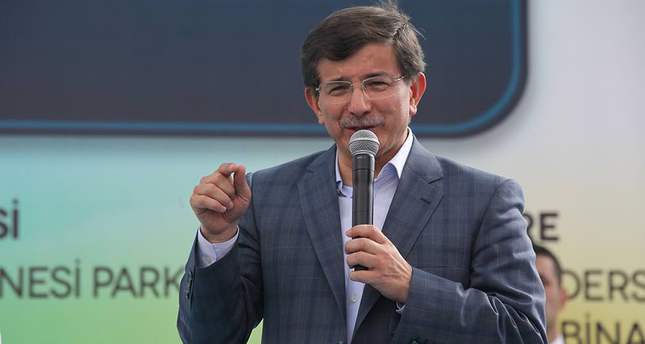 Prime Minister Ahmet Davutoğlu held his first rally in his hometown of Konya, a city in southern Turkey, hours after he received a vote of confidence for his government from Parliament on Saturday. Addressing Konya residents, Davutoğlu said, "We will work day and night until the elections in 2015, and we will crown democracy with a great victory that will be guaranteed for the next 10 years," he said. A new constitution was the government's priority, said Davutoğlu and added that he is aware of his responsibility as the prime minister of the new government. Davutoğlu noted that the election campaign for the upcoming general election to be held in June 2015 started with this rally.

Davutoğlu said that there are some circles that expect turmoil within the AK Party, and he asserted that they would be disappointed. "As in every march that we have witnessed in the last 13 years, this march will also end with victory. No one should expect internal conflict within the AK Party during its march," he added. The prime minister remarked that making a new constitution would be their first mission after the 2015 elections. Davutoğlu also reiterated his support for the ongoing reconciliation process by saying that with the new constitution, the success of the process will be inevitable.

Calling on opposition parties, Davutoğlu said: "We have received the vote of confidence from Parliament, and we have also listened to criticism from the opposition during this process.I call on all the opposition parties, instead of engaging in petty political calculations bring proposals and recommendations and make a positive contribution to all of us to honor the 2023 vision."

Over the weekend, the government of Davutoğlu won a vote of confidence in Parliament on Saturday, a little over a week after the former chief diplomat was crowned to take over from longtime premier Recep Tayyip Erdoğan.

Turkey's ruling Justice and Development Party (AK Party) last week approved Davutoğlu as successor to Erdoğan, who has governed Turkey as the prime minister for over a decade with development-focused policies and who was sworn in as president on Thursday.
Davutoğlu's government received 306 votes in favor and 133 against in Saturday's confidence vote. "With the support we received, we promise before our esteemed Parliament and people to work day and night," Davutoğlu told Parliament, adding, "The future of our country is our common fate and future."

Davutoğlu said in his vote of thanks speech before the Parliament that they are intent on building Turkey's future with positive contributions and by taking criticism from opposition parties into account. He said his government was keen on realizing 2023 targets to build a "New Turkey" based on a new constitution, make peace with Kurds and create a booming economy.