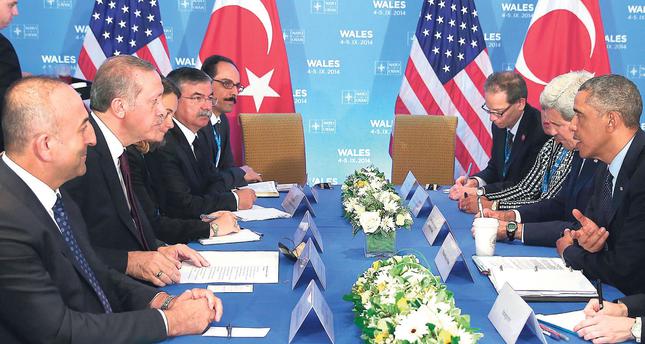 President Erdoğan, speaking after the NATO summit, said that Turkish and U.S. intelligence will cooperate on the Gülen Movement, which is considered a threat to the Turkish State while U.S. President Obama was also asked to deport Gülen

President Recep Tayyip Erdogan on Saturday said Turkey's National Intelligence Organization (MIT) and the U.S. Central Intelligence Agency (CIA) will work closely on the Gülen Movement issue, which is classified as a national threat to the Turkish state. Speaking to journalists on his way back from the NATO summit held in Wales, U.K., Erdogan stated that he had raised the issue of the Gülen Movement, which is believed to have infiltrated key government institutions with an aim to overthrow the Turkish government, at a face-to-face meeting with his U.S. counterpart Barack Obama during the summit.

Obama had asked Turkish officials for data and documents regarding the movement, Erdoğan said before adding that the MIT and CIA would be cooperating on the matter. "I talked about the issue of the parallel structure with the president," Erdoğan told journalists. The term "parallel structure" is used to denote the Gülen Movement, which tried to form a parallel power structure with the state alternative to proper state hierarchy. "We [Turkey] reiterated that the intelligence agencies [MIT and CIA] will intensifiy contacts with each other," said the president, adding that foreign ministers would also follow up on the issue.

Erdoğan noted that related government officials will carry out required legal studies on the espionage activities of the movement in Turkey with determination and conveyed those studies to U.S. officials.

Presidency sources confirmed that the Gülen Movement, which is classified as a national security issue by Turkey, is also on the agenda of the U.S. president.

Regarding his tête-à-tête with Obama, Erdoğan said that the presidents discussed what kind of steps may be taken in Turkish-American relations under the scope of a model partnership during the talk that lasted 1 hour and 25 minutes.The president noted that they also compared notes on conflicts in the region, including Ukraine, Syria, Iraq, Libya, Egypt and Palestine.

When a journalist asked whether Erdoğan will meet Obama again in the U.N. Security Council, Erdoğan said that their talks at the NATO summit is a step, and if certain developments regarding their agendas happen, they may talk again.Erdoğan specifically added that what is important is to remain connected through effective use of the governments' mechanisms.

Led by U.S.-based imam, Fethullah Gülen, who lives in self-imposed exile in rural Pennsylvania, the Gülen Movement is a multinational movement accused of wiretapping thousands of people, including Turkish government officials, and encrypting phones. It has over 140 private schools and has charity organizations around the world, including the U.S., Europe, Asia and Africa. It has been accused of infiltrating state institutions to gain control of state mechanisms and illegal wiretapping, forgery of official documents and spying.

Regarding claims that there has been a cloud over relations between Obama and Erdoğan, the Turkish president dismissed the allegations by saying that the past is the past in politics.

Commenting on his talks with German Chancellor Angela Merkel following the German weekly Der Spiegel's report that German intelligence BND has been keeping tabs on Turkish politicians, Erdoğan said that both politicians decided to intensify communication between intelligence agencies. "Yet, ally countries should protect their sensitivity towards each other on these kinds of issues," Erdoğan urged and pointed out that Turkish
intelligence head Hakan Fidan is expected to hold talks with officials from German intelligence.

Noting that what may be done against ISIS was on the agenda of the summit, Erdoğan said other NATO member countries are trying to prevent European citizens leaving their countries to support ISIS. It is believed that that at least 500 people from Britain, 700 from France, 400 from Germany and hundreds more from countries, including the U.S., Canada, Austria, Denmark, Spain, Sweden, Belgium, the Netherlands and Australia, have traveled to fight in the region. "There is a goal to form a new government in Iraq by Sept. 11. There are some duties that fall to our side, as Turkey. We will follow up this process closely. Adversities regarding Kurdish, Sunni and Turkmens in the region are as they stand. Forming a new government in Iraq is necessary," said Erdoğan regarding the issues in Iraq.