CHP leader upset with delegates' double play against him 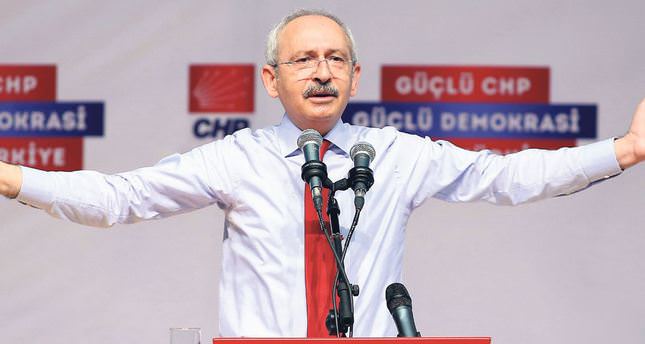 Kılıçdaroğlu last week won against his rival Muharrem İnce, who resigned from his deputy chairmanship post and announced his candidacy for party chair - the vote differences between the two rivals was lower than anticipated. Even though most CHP delegates signed for Kılıçdaroğlu's candidacy, Kılıçdaroğlu received 740 votes while İnce received 415, which was beyond expectations.

Evaluating the result of the extraordinary congress to the Turkish daily Hürriyet, Kılıçdaroğlu implied that a message was given at the congress to the party administration and remarked that he was upset that although certain delegates signed in favor of him, they voted for İnce.
Implying that certain delegates played both sides, Kılıçdaroğlu said that this attitude clashed with CHP culture. "Of course, we [CHP] should evaluate the decision of each delegate. The delegates showed their displeasure this time […] you are running a party, you should consider all statements and voting [rates]," said the CHP leader, who was elected as the party chair for the third time since he first took the CHP leadership post in 2010.
As CHP dissidents criticized Kılıçdaroğlu of leaning toward the right, a former member of the Islamic-rooted Felicity Party (SP), Mehmet Bekaroğlu, who has been harshly criticized by intra- party opponents, was nominated to Kılıçdaroğlu's Party Assembly (PM) list. Yesterday, Bekaroğlu paid a visit to Kılıçdaroğlu to thank him.

Even though Kılıçdaroğlu stressed unification in his vote of thanks on the last day of the congress, his rival İnce said that he will continue to be an intra-party opponent and added that Kılıçdaroğlu put pressure on CHP delegates before the congress to sign and vote for him. He also pledged to destroy the empire of fear built by Kılıçdaroğlu.