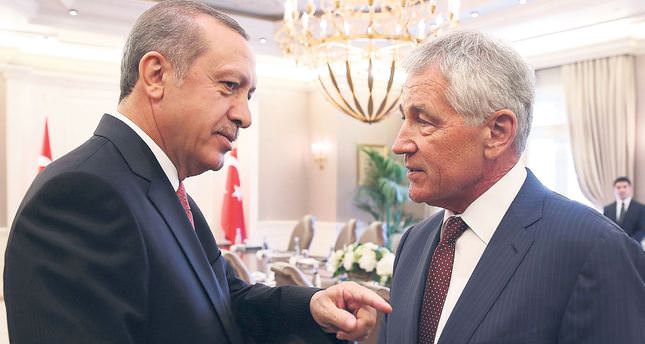 Yesterday, U.S. Secretary of Defense Chuck Hagel paid a visit to Turkey to hold talks with Turkish President Recep Tayyip Erdoğan, Prime Minister Ahmet Davutoğlu, Chief of General Staff General Necdet Özel and Defense Minister İsmet Yılmaz to see how much Turkey can help in the U.S.-led coalition against the increasing threat of the Islamic State of Iraq and al-Sham (ISIS). More high-level U.S. officials are expected to visit in the coming weeks.

Speaking after the Cabinet meeting on Monday, Deputy Prime Minister Bülent Arınç stated that officials held talks regarding the regional issues with Hagel.

Following the NATO summit, where the ISIS threat occupied the main agenda, U.S. President Barack Obama said he would welcome Ankara's cooperation after meeting Erdoğan on Friday at the summit.

According to U.S. officials, Turkey is seen as key to the coalition due to its proximity to the troubled regions of Syria and Iraq. Yet, the fact that ISIS is currently holding 46 Turkish citizens, including diplomats seized from the Turkish consulate in Mosul when it overran Iraq's second-largest city in June, is the reason for Turkey's sensitive stance toward the coalition. Another reason leaving Turkey hamstrung is that Turkey is currently has the second-highest Syrian refugee population after Lebanon, with more than 840,000 refugees, according to U.N. figures.

Speaking to Reuters, a U.S. official traveling with Hagel said, "Part of the point of this visit is to follow-up to really see how far they're [Turkey] willing to go, understanding that they have tremendous national security challenges at home - just given the [Syrian] refugee problem and then, of course, this hostage situation."

The official added that Turkey's close proximity to the conflict region makes Turkey's support vital at the same time. "By geography, Turkey is going to be absolutely indispensable to the ongoing fight against ISIS because of where they sit, the access we currently already have militarily and the cooperation that we have militarily," the senior U.S. defense official said, speaking on the condition of anonymity.

Another issue discussed at the talks is to prevent "Western fighters" who traveled from the U.S. and EU countries to the troubled region by crossing Turkey's border with an aim to support ISIS. It is now believed that at least 500 people from Britain, 700 from France, 400 from Germany, and hundreds more from other countries, including the U.S., Canada, Austria, Denmark, Spain, Sweden, Belgium, the Netherlands and Australia have traveled to fight in the region.

To halt the foreign terrorist flow to the region, Turkey suggested more intensified intelligence sharing with NATO allies at the summit. So far, it is reported that Turkey has arrested and deported more than 1,000 terrorists so far.

During the talks at the summit, the countries decided to work in cooperation against the "Western fighters" issue and Turkey's contribution on the issues is seen as vital due to its geographical closeness to the wartorn region. Complaining about Turkey's Western allies' insufficient efforts in combatting ISIS, which has displaced and killed hundreds of thousands of people in Iraq and Syria, Erdoğan told British Prime Minister David Cameron at the summit that Turkey had taken all the necessary measures. He later told Cameron that Turkey had blocked all foreign citizens whose names were given by the countries from which they held the passports from entering Syria and Iraq. He then said ISIS is more popular in Western countries and the authorities of these countries should question the issue. "These people [ISIS recruits] were educated and raised in your country," Erdoğan reportedly told Cameron.

The U.S. also said on Friday that it was forming a "core coalition" to battle ISIS militants in Iraq, calling for broad support from allies and partners but ruling out committing ground forces. The core coalition, led by the U.S., comprises Germany, France, Italy, Denmark, Poland, Turkey and Canada, as well as non-NATO member Australia. "We need to attack them in ways that prevent them from taking over territory, to bolster the Iraqi security forces and others in the region who are prepared to take them on, without committing troops of our own," U.S.
Secretary of State John Kerry said at a meeting of 10 nations. "Obviously I think that is a red line for everybody here: no boots on the ground," he added. The defense and foreign ministers and secretaries of the U.S., Britain, France, Germany, Canada, Australia, Turkey, Italy, Poland and Denmark met on the sidelines of a NATO summit in Wales to discuss a strategy for addressing the militant group that has taken over large areas of Iraq and Syria.