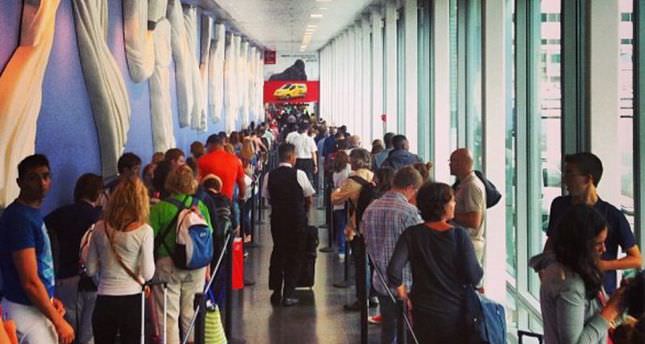 Speaking to the Anadolu Agency (AA) Editor's Desk, Foreign Minister Mevlüt Çavuşoğlu evaluated the issues discussed at the NATO summit held in Wales on Sept. 4-5. As a result of the increasing the self-proclaimed Islamic State of Iraq and al-Sham (ISIS) threat, all eyes once again turned to Turkey after U.S. President Barack Obama announced at the summit a "core coalition" plan to fight against ISIS.

Touching on the regional issues in the Middle East, especially regarding the threat posed by ISIS militants and the security crisis in Iraq, Çavuşoğlu said that Turkey has arrested and deported more than 1,000 terrorists so far.

Answering a question about Western fighters in the Middle East, Çavusoğlu said Turkey has been taking measures to prevent such people from crossing into conflict zones via Turkey. During his speech, Çavuşoğlu said that more than 8,000 foreigners from 80 countries traveled to Syria and Iraq to support ISIS and they both use Turkey and other regional countries as their route to conflicted areas.

Çavuşoğlu emphasized that Turkey is a country that always combats terrorism and it is in cooperation with the countries from which the Western fighters came, including the U.S. and EU.

"Both other leaders and [U.S. President Barack] Obama at the summit confirmed our determination on cooperation. We [Turkey] said we need more cooperation, our [NATO countries and Turkey] intelligences should work more intensively," he said, and added that Turkey's determination to combat terrorism issues continues with no concessions.

When asked whether Turkey will have a role in sanctions against ISIS, Çavuşoğlu said that NATO allies want Turkey to be included in every step against ISIS as a fellow NATO member country. The issue of foreign fighters' participation in extremist groups in the Middle East arose after ISIS gained control of Mosul, Iraq's second largest city, in June. In Iraq, European fighters have fought alongside ISIS militants who have been responsible for killing thousands of people.

Çavuşoğlu remarked that Turkey supports a new government that may be established in Iraq soon, but urged that this government should be inclusive to prevent possible instability.

Çavuşoğlu emphasized that the mistakes made by former Prime Minister Nouri al-Maliki's government in Iraq should not be repeated again and Iraq's territorial integrity should be protected.

Çavuşoğlu continued by saying, "All factions and people in Iraq should have access to the country's natural resources, as required by the constitution."

He said that Turkey has always fought against terrorism and Turkish officials are doing everything possible to secure the release of the 49 Turkish citizens captured by ISIS. He said that the issue is highly sensitive.

Moving on to strained Turkey-Israel relations, Çavuşoğlu said, "Turkey will, of course, normalize relations if Israel agrees to our conditions." He further highlighted that Turkey had been making efforts for 12 years for peace and stability in the Middle East and said, "However, Israel has always disappointed us." Diplomatic relations with Israel were downgraded following the 2010 Israeli attack on the Turkish aid flotilla Mavi Marmara off the coast of the besieged Gaza Strip – an attack in which 10 activists were killed. Turkey imposed three conditions to normalize relations with Israel: an Israeli apology, compensation for the victims' families and lifting the blockade on the Gaza Strip.