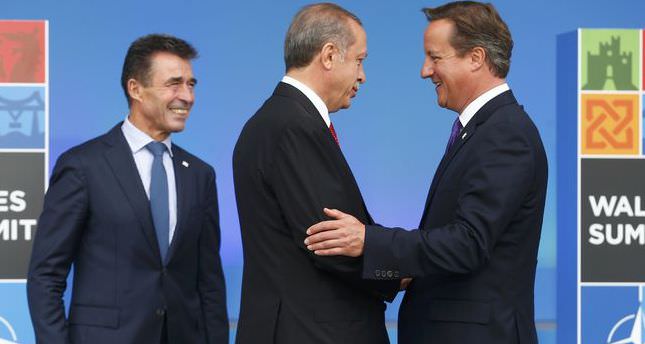 by Daily Sabah Sep 09, 2014 12:00 am
British Prime Minister David Cameron has said Turkish President Recep Tayyip Erdoğan asked for cooperation to enhance security in Turkey's borders via military aid, intelligence and security measures to combat its struggle with the self-proclaimed Islamic State of Iraq and al-Sham (ISIS), following the NATO summit that brought together many world leaders to solve various challenges in the region.

Sharing the talks he had with Erdoğan during the NATO summit that took place between Sept 3 and Sept. 4. in Wales, with the British parliament's House of Commons, Cameron stated that Turkey had already taken many preventive measures and was seeking support from Britain over significant issues concerning ISIS.

Cameron highlighting that they will continue backing the Kurds in their fight with militants of ISIS, said: "this includes both weapon provision and military support". Cameron noted that the struggle with ISIS should be headed by Iraqis saying : "yet, we will continue to support the efforts of countries in the region."

Responding to a question asked during the session on whether Turkey was told to check its borders as part of the combat it carried out against ISIS during the NATO Summit, Cameron conveyed that Turkey was taking the necessary steps to increase security at its borders.

Erdoğan reportedly told Cameron during the NATO summit that Turkey had blocked all foreign citizens whose names were heralded to them by the countries from which they were citizens of, from entering Syria and Iraq. He then said ISIS is more popular in Western countries and the issue should be questioned by the authorities of these countries. He reportedly also complained about Turkey's Western allies' insufficient efforts in combatting ISIS.

Prime Minister David Cameron last Monday said that Turkey and the U.K. have been cooperating on security intelligence and other issues, that they never had before, to take precautions in preventing militants returning to the U.K. Giving a speech to the House of Commons over the increasing Islamic State of Iraq and al-Sham (ISIS) threat to European countries, Cameron stated that among the measures envisaged was a plan to give border police powers to seize passports from departing would-be ISIS militants and restricting the movement of suspects. "When police are suspicious of a traveler at the border, they are not currently able to apply for the royal prerogative, so they only have limited stop and search powers," said Cameron.

"We will introduce specific and targeted legislation to fill this gap by providing the police with a temporary power to seize a passport at the border, when they will be able to investigate the individual concerned," the British prime minister also added last Monday shortly before the NATO summit took place .

Answering a question about Western fighters in the Middle East, Çavusoğlu said Turkey has been taking measures to prevent such people from crossing into conflict zones via Turkey. During his speech, Çavuşoğlu said that more than 8,000 foreigners from 80 countries traveled to Syria and Iraq to support ISIS and that they both use Turkey and other regional countries as their route to conflicted areas.