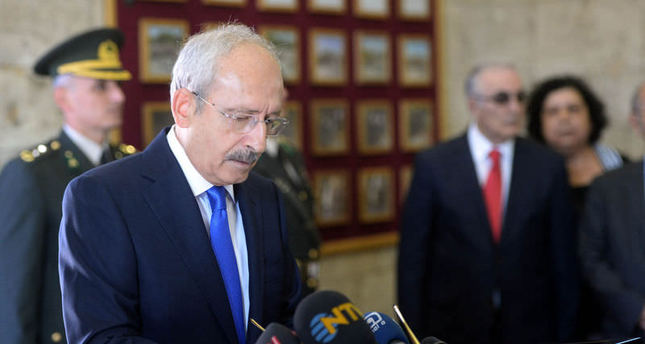 by Daily Sabah Sep 09, 2014 12:00 am
The Turkish main opposition Republican People's Party (CHP) leader Kemal Kılıçdaroglu gave the green light to a U.S.-led coalition that aims to fight against the increasing threat of the Islamic State of Iraq and al-Sham (ISIS) in Iraq and Syria. At the NATO summit held on Sept. 5-6 in Wales, 10 nations, including Turkey, agreed to establish a core coalition to halt ISIS. As part of the agreement, the U.S. Secretary of Defense Chuck Hagel arrived in Turkey on Monday and held talks with Turkish officials.

As part of the agreement, the U.S. Secretary of Defense Chuck Hagel arrived to Turkey on Monday and held talks with President Recep Tayyip Erdoğan, Prime Minister Ahmet Davutoğlu, Defense Minister İsmet Yılmaz and Chief of General Staff General Necdet Özel to see how far Ankara will contribute to the coalition against ISIS. Yesterday, Kılıçdaroğlu said at a meeting organized for the 91st anniversary of the establishment of the party that the CHP will not stand against Turkey's inclusion to any international operation against ISIS.

Kılıçdaroğlu's move came a week after the Prime Minister Davutoğlu called on opposition parties to bring proposals and recommendations and make a positive contribution, instead of engaging in petty political calculations. The CHP leader further noted that if the president was to invite the CHP to discuss how Turkey can contribute to the coalition, the party would accept the invitation. The main opposition boycotted Erdoğan's presidency by not participating in the president's oath-taking ceremony.