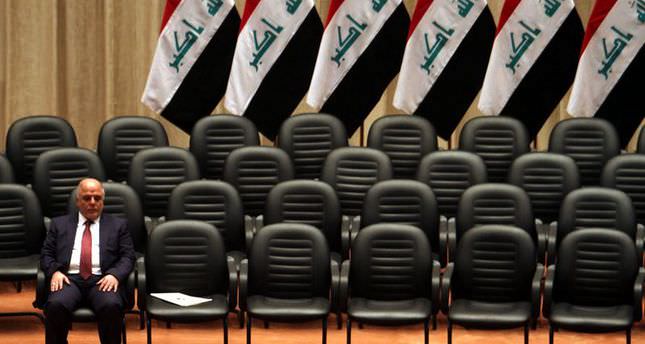 by Daily Sabah Sep 09, 2014 12:00 am
Turkish Prime Minister Ahmet Davutoğlu made a phone call to Iraq's new Prime Minister Haider al-Abadi and congratulated him after officially forming the government by receiving a vote of confidence in the Iraqi parliament on Monday.

According to sources in the prime minister's office, during the conversation Davutoğlu emphasized Turkey's readiness to give support to the newly formed Iraqi government by indicating Turkey's standing by Iraq and Iraqi people as a brother. Davutoğlu became the first statesman to congratulate Abadi in his new post.

The new government, which includes Sunni, Kurdish and Shiite deputies, was approved by 177 votes out of 280 in parliament.

In this regard, Turkish Foreign Minister Mevlüt Çavuşoğlu made remarks about the significance of a unity government in Iraq last Monday. In the Anadolu Agency's Editor's Desk, where he discussed recent developments in the region, Çavuşoğlu said Turkey strives to contribute forming an inclusive government in order to solve the political crisis and internal disorder in Iraq.

"Iraq's borders and territorial integrity must be protected. It is necessary that all Iraqis should benefit from the country's ground and underground resources, nobody should be excluded in the context of the Iraqi constitution, the region should be purged from terror and policies that involve should be institutionalized by leaving sectarian policies aside," he said and added, "For the economic development of Iraq and consolidating democratic institutions there, the essential basis is to form an inclusive government."