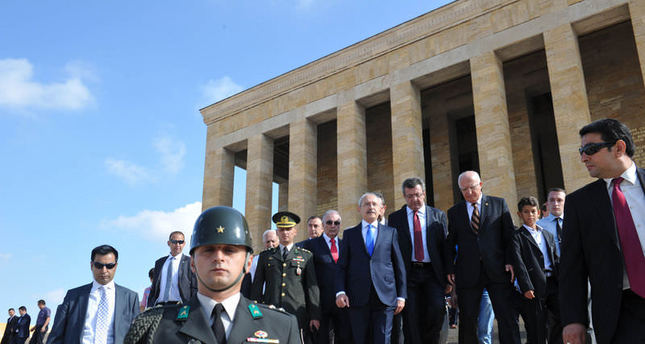 by Daily Sabah Sep 09, 2014 12:00 am
Turkey's main opposition party, the Republican People's Party (CHP) celebrated its 91st foundation anniversary on Tuesday in CHP headquarters in Ankara and in provincial branches.

CHP leader Kemal Kılıçdaroğlu and party members attended the ceremony held in Anıtkabir, the mausoleum of Mustafa Kemal Atatürk, who is the founder of the modern Turkish Republic and also the first leader of CHP.

Recent issues such as the elevator crash in Istanbul, intervention plans to halt ISIS and investigations on Gezi Park protests were on the agenda of statements given by Kılıçdaroğlu and other deputies.

This date was chosen to commemorate İzmir's liberation from Greek and Allied troops on 9 September 1922, which also marked the end of the War of Liberation, which lasted between 1919-1922.