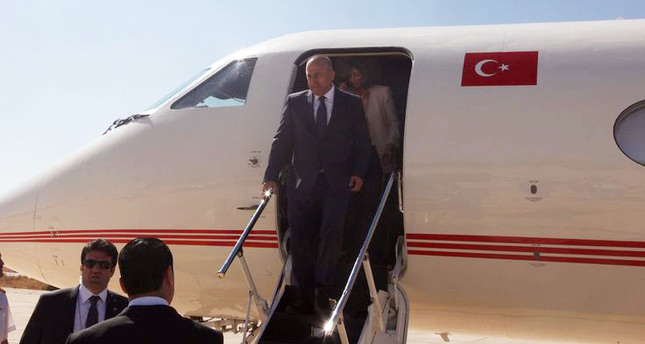 by AA Sep 09, 2014 12:00 am
Turkey's foreign minister begun a three-day trip to Jordan, Bahrain, Qatar and Saudi Arabia on Tuesday.

Mevlüt Çavuşoğlu made his first overseas visit as foreign minister to Jordan and his three-day trip will end in Saudi Arabia on September 11.

U.S Secretary of State John Kerry also headed to the Middle East on Tuesday to Saudi Arabia and Jordan to meet with Middle-east leaders to discuss the regional conflict against the Islamic State.

His visit comes as U.S President Barack Obama is set to announce his plan for an offensive against the self-proclaimed Islamic State of Iraq and al-Sham (ISIS) militants on Wednesday.

Obama announced a "core coalition" plan to fight against ISIS at the NATO summit last week.

The coalition comprises of ten countries including the U.S., the U.K., France, Germany, Canada, Australia, Turkey, Italy, Poland and Denmark.

Meanwhile, U.S. Defense Secretary Chuck Hagel visited Ankara on September 8 to hold talks with Turkish officials about Turkey's contribution in the fight against the Islamic State in Iraq.

Armed groups linked to the ISIS militants have captured large amounts of territory in Iraq in recent months, forcing thousands of Iraqis including Turkmen, Arabs and Ezidis to flee.

The United States has conducted a total of 133 airstrikes across Iraq on ISIS targets since President Barack Obama authorized the military to carry out an air campaign in early August.