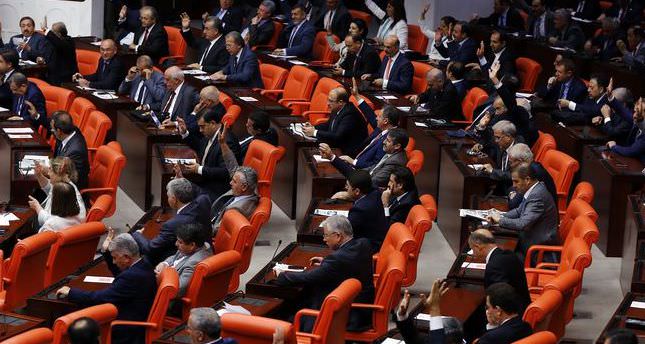 by Daily Sabah Sep 10, 2014 12:00 am
An Omnibus bill, including those relating to the mining industry which were tabled after the coal mine disaster in May that killed 301 miners in western Turkey and the appointment of 35,000 teachers passed parliament early on Wednesday morning.

That legislation includes amendments to laws regarding mining, contact laboring, structuring of state holdings as well as 42 other laws.

According to the newly passed bill, the insurance debts of the miners who lost their lives in the coal mine accident in Soma will be canceled. The families of the victims of Soma will receive a 'death' salary regardless of their monthly income. One of the relatives of each Soma victim will be provided with a right to work in state institutions.

The bill came as a relief to mine workers. According to the bill, the seniority requirement will be removed and the working time of the miners will not exceed 36 hours a week and 6 hours a day. The retirement age will also be reduced to 50 from 55.

Paid leave, annual leave, education and course duration, the period of preparation before and after work and national holidays will be counted as working time for laborers who are insured to work in areas such as mines and tunnel and drain construction sites.

The employers will have to assign a job security expert, a doctor and health staff, under the new legislation.

The workers of the mines where Lignite and coal is drawn won't be paid less than the double of the minimum wage.

35,000 teachers and 1,000 other civil servants working for National Education Ministry's other service departments will be assigned to their posts until Dec. 31, 2014, according to one of the other amendments.

The municipalities above the population of 10,000 people will establish dorms in appropriate places, the bill also says.

The stay or cancellation of a decision by court to appoint or re-assign a high-state offical to a post as well as removing them from position and de-ranking them will be implemented in two years and they will be appointed to a another staff.

The civil servant who fails to abide by the decision of the court will face charges but the disipline judgements will be confidential.
The current internet law that was amended and approved by parliament on Feb. 26, grants the Telecommunications Directorate (TİB) some powers over Internet use, such as blocking access to websites without a court order.

Within four hours of a request from TİB, Internet service providers are required to block a designated website.

After the request from TİB, the head of the body is obliged to submit the decision to block a certain Internet site to a penal judge of peace within 24 hours to obtain a court ruling, and the judge needs to announce a decision over the issue within 48 hours.

With the passing of the amendment the decision made by the court whether to block a website will be reduced to four hours from 24.
Following the approval of the bills, parliamentary sessions will be postponed until the constitutional opening on October 1.
The bill will take effect once it is assented by the president.