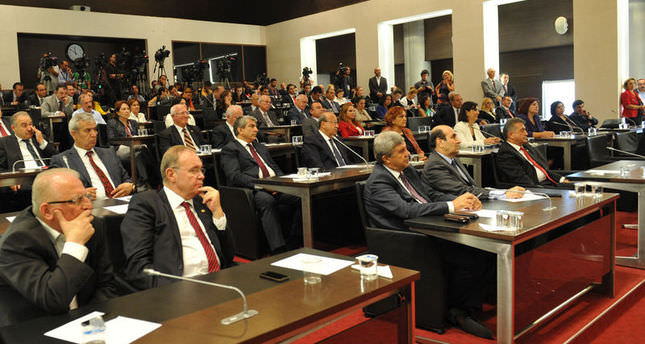 by Daily Sabah Sep 10, 2014 12:00 am
Deputy Prime Minister Yalçın Akdoğan, in a televised interview, commented on the current situation of the Republican People's Party (CHP) and claimed they are experiencing an ideological trauma following the party's 18th extraordinary congress where Kemal Kılıçdaroğlu was re-elected chairman.

Touching upon the current intraparty conflict and clash of different blocs within the party, Akdoğan said that the congress was not able to resolve the political crisis the CHP is currently experiencing.

He claimed that in reality such congresses do not only result in changes in leadership, but also the mindset, paradigms and structure, yet this was not evident in the CHP's recent congress. "I think the CHP is experiencing an ideological trauma and has numerous structural issues," said Akdoğan, who added that the party is unable to take steps to question and permanently resolve its issues and conduct self-criticism to figure out what went wrong with the party.

The CHP has experienced a serious intra-party crisis following the presidential election when the party nominated Ekmeleddin İhsanoğlu as a joint presidential candidate to the disappointment of many secular CHP supporters who claimed the party was leaning toward the right, contrary to their ideology.

Tensions escalated with Kılıçdaroğlu's last move that saw Mehmet Bekaroğlu - who was a member of the far right Felicity Party (SP) - transferred to the party and included in the Party Assembly through the gender quota within the CHP. The quota, which guarantees seats to female members from the party, was exploited by Kılıçdaroğlu to include Bekaroğlu in the Party Assembly.

Kılıçdaroğlu last week won against his rival Muharrem İnce, who resigned from his deputy chairmanship post and announced his candidacy for party chair.