Kurdish exiles return home after years as part of reconciliation 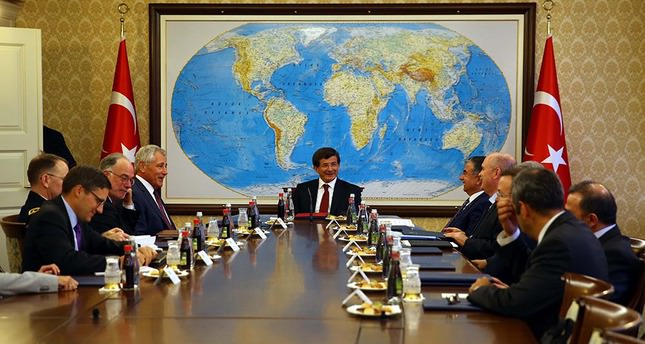 As efforts to expedite the reconciliation process continue under the 62nd government run by PM Davutoğlu, many Kurdish intellectuals and politicians are returning return home after years away

Efforts to ensure the return of Kurdish intellectuals living in exile as part of the reconciliation process between Ankara and the Kurds continues at full steam under the 62nd government, headed by Prime Minister Ahmet Davutoglu. Fleeing from prosecution and limits on freedoms, many Kurdish intellectuals, politicians and artists went abroad but are now slowly returning to their homes after efforts in the reconciliation process. Necdet Buldan, the former mayor of the southeastern city of Hakkari's Yüksekova district, and Mahmut Kılınç, who is a writer and TV programmer,
have returned to Turkey.

Buldan and Kılınç were tried in absentia on grounds of being members of the self-styled "Kurdish Parliament in Exile" and "Kurdistan National Congress."

Yesterday, Buldan and Kılınç returned to the country after 20 years when Ankara's 8th High Criminal Court, which is in charge of the case, released them. Also, the court rescinded the arrest warrants on the condition that the other 21 defendants, including Zübeyir Aydar and Remzi Kartal, who are part of the administration of the outlawed Kurdistan People's Congress (Kongra-Gel), testify before the court within four months.
Buldan before the court said that they had no intention to carve up Turkey and added, "What we did to resolve the Kurdish question is being done by the highest state authority now."

Speaking to the Yenişafak daily following the verdict, Kılınç expressed his hope that the reconciliation process will appease everyone in the country.
Referring to the decades-long conflict between the outlawed PKK and the Turkish Republic before the reconciliation process, Kılınç yesterday said on his twitter account that both the state and the PKK owed people who have been exposed to persecution an apology by using the "permanent solution in the new phase" hashtag.

For the last decade, Turkey has confronted demons from its past, namely bans imposed during post-coup martial law on freedom of speech, especially for the Kurdish community. The reconciliation process will, if successful, put an end to the Kurdish question that has plagued the country for years while attempting to make amends for the mistreatment of Kurds.

Eight defendants, including Kurdish singer Şivan Perver, poet and politician Kemal Burkay, Mehdi Zana, Yaşar Kaya and lawyer Şerafettin Kaya arrived in Turkey in April after years of exile in European countries.Their testimony before the court made them immune from being charged.

Now in his 80s, Şerafettin Kaya was first detained by a martial law court in the southeastern Turkish province of Diyarbakır following the 1971 coup after he stepped forward to defend Kurdish political prisoners as a lawyer. He was tortured in prison and faced trial for his defense of Kurdish rights.
He left Turkey in 1982, two years after a military coup.

Speaking to Daily Sabah regarding the return of Kurds in exile, Vahdettin İnce, Kurdish author and political analyst, evaluated these returns as the indicator of change in the country. "[These returns] arouse excitement. They left to exercise their freedom of expression, and they started to return because they feel that Turkey is changing. This gives me hope for the future of the country," said İnce.

Describing the reconciliation process as a "historic" step, İnce said that during President Turgut Özal's term in office, he tried to implement the same initiatives but failed. "This time we [Turkey] are witnessing a huge change. The Kurdish question was the core of all issues in the country and occupied the country's agenda for years. ... I was upset since people died, cultures died," said the Kurdish analyst.

The reconciliation process to end the threat of the terrorist PKK organization and address the problems of the Kurdish community began in early 2012. The government pledged democratic reforms to empower minorities, particularly the Kurdish minority, which is by far the largest at 18 percent of the population.

In the last few months, it was announced that a roadmap for the reconciliation process is on the agenda of the government by modeling other examples across the world such as the "Good Friday Agreement" between the British government and the Irish Republican Army (IRA).
As part of the roadmap, those who live in PKK camps and decide to return to their families, social life and politics will be secured by law. A legal amendment regarding the issue is to be finalized by the end of 2014. As the first step, nearly 1,000 former PKK members who have continued to live in cities such as Irbil and Sulaymaniyah will be able to return to Turkey. For PKK militants who live in Europe, a faster return schedule is on the table.