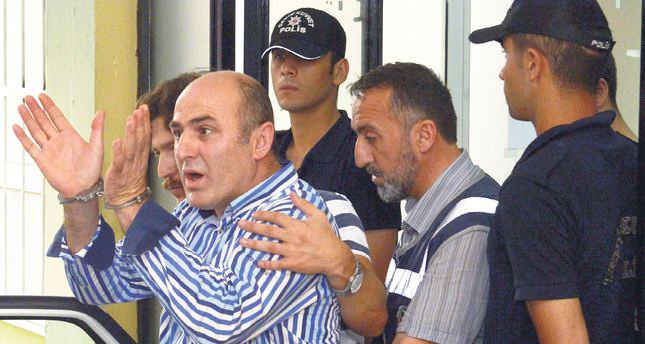 A report prepared by prosecutors shows 26 out of 76 encrypted phones, belonging to members of intelligence and top army officials, were illegally wiretapped by Gülenist suspects

A closer look at recent investigations have revealed significant details about the use of unlawful wiretappings of encrypted state phones as reports claim meetings with foreign officials were unlawfully recorded allegedly by agents of the Gülen Movement, which is currently under scrutiny for infiltrating Turkish state institutions.

Previously, electronic serial numbers of encrypted phones belonging to Prime Minister Recep Tayyip Erdoğan, Chief of General Staff Necdet Özel and Undersecretary of MİT Hakan Fidan were discovered while trying to recover the digital database containing wiretapped recordings at Turkey's Telecommunications Authority (TİB) that were deleted following the revealing of the wiretapping scandal that has shaken Turkey since its revelation.
When experts investigating the case were unable to determine the owners of the phones, the investigation deepened and found that the phones were used by MİT and the General Staff for coordinating domestic and foreign operations.

According to reports, a total of 304 separate wiretapping orders were issued for 76 encrypted phones, but more encrypted phones that might have been wiretapped may be found as the investigation continues.

Currently, the investigation is under the phase of determining how the recordings were used and to whom they were transferred.

Fethullah Gülen, who resides in the U.S. in self-imposed exile, leads the Gülen Movement, which has charter schools and organizations in hundreds of countries around the world. The movement is currently accused of attempting to infiltrate Turkish state institutions including the police and judiciary as well as unlawfully wiretapping thousands of journalists, politicians, top secret state meetings and encrypted phones belonging to government officials. Prime Minister Ahmet Davutoğlu and President Recep Tayyip Erdoğan have made it clear that infiltrators will be held accountable for their betrayal and attempting to take over the state through a coup. Currently, dozens of Gülenist agents within the police have been arrested while more arrests are expected as police interrogate several other suspects and conduct a deep investigation in numerous institutions including the police department and TİB.

The movement has grown hostile toward the government following the government's announcement that they would close down prep schools, which disturbed Gülenists, as they own most of the prep schools in the country and recruit future supporters through these institutions.

The Dec. 17 operation was initiated by a number of Gülenist prosecutors claiming that the government is involved in corruption, resulting in the resignations of four ministers whose sons were involved in the case, while a few ministers and parliamentarians who support the movement have stepped down from their posts in the Justice and Development Party (AK Party).

Gülenist prosecutors illegally ordered searches of National Intelligence Organization (MİT) trucks in Hatay on Jan. 1 and in Adana on Jan. 19, and security forces assaulted a number of intelligence officers, which was captured on security cameras and sparked debates. The movement is also accused of illegally wiretapping thousands of individuals and institutions, including prominent figures like ministers, academics, universities, nongovernmental organizations and many others under the fabricated Tawhid-Salam terror organization case created by Gülenist agents within the security forces and judiciary.

More importantly, it is also alleged that agents of the movement working for the ministry used a bugging device to wiretap a top secret Ministry of Foreign Affairs security meeting concerning Turkey's possible response to the event at the tomb of Suleiman Shah in Syria, a Turkish enclave, which was attacked by Syrian forces, exposing a serious threat to the country's i ntel l i gence organization, ministry and other government officials.