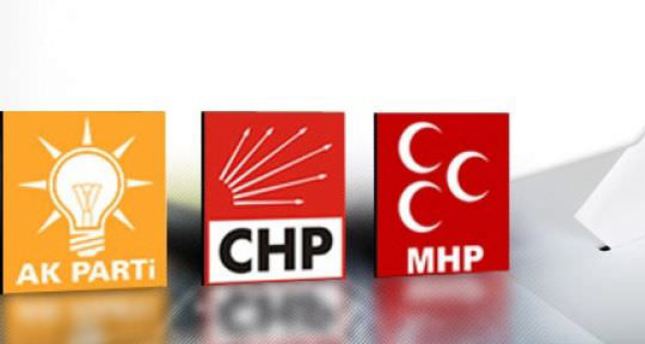 by Daily Sabah Sep 11, 2014 12:00 am
The Objective Research Center (ORC), a renowned research institution, has recently conducted a survey to analyze public opinion in Turkey prior to the general elections that will be held in June 2015 revealing that 47.4 percent of survey participants supported the Justice and Development (AK Party). According to the survey, which was conducted face-to-face with 2,310 participants in 32 different provinces between Sept. 2 and Sept. 6, it was predicted that the AK Party would receive 47.4 percent of the vote if the elections took place this Sunday.

The ruling AK Party received 42.9 percent in the March 30 local elections. The survey shows almost half of the participants supported the current ruling party headed by Prime Minister Ahmet Davutoğlu. The findings also showed that Turkey's main opposition Republican People's Party (CHP) received 24.3 percent whereas other opposition parties such as the Nationalist Movement Party (MHP) and the Peoples' Democratic Party (HDP) received 15 percent and 9.5 percent respectively. The study also revealed that more than half of survey participants thought that the AK Party will be in office next term while 28.5 percent think that the current party will not be able to win the elections. Of the participants, 11.2 percent opted not to give their opinion. Participants answered "yes" to the question whether the AK Party will be the leading party in the elections at a rate of 97.5 percent and 2.5 percent did not respond to the question. The results of the survey suggested that opposition parties' supporters also had little faith that the party they support would win the elections.

The institution, which carried out various surveys before local elections and presidential elections, gave close figured to the actual result, bolstering its reliability.

One of the founders and former leader of the AK Party, Recep Tayyip Erdoğan, won the majority of the vote in the first round of the presidential election while the joint candidate of the CHP and MHP, Ekmeleddin İhsanoğlu, received 38.4 percent of the vote. Selahattin Demirtaş lagged behind the list receiving 9.8 percent.