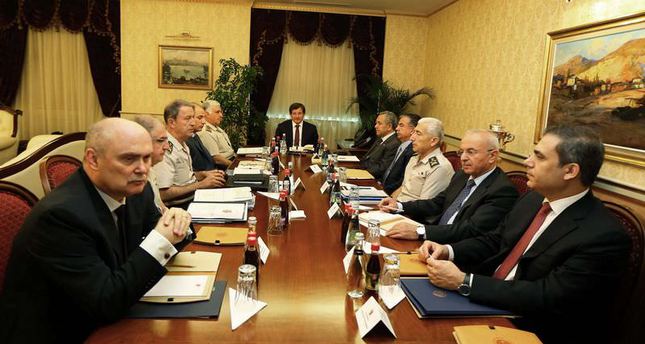 by Daily Sabah Sep 11, 2014 12:00 am
Hours before the United States has announced its plans to strike ISIS targets in Iraq and Syria, Turkey has expressed that it will stay out of an offensive against the self-proclaimed Islamic State of Iraq and al-Sham (ISIS) militants due to the fact that the latter possesses 49 Turkish diplomats as captives.

While Prime Minister Ahmet Davutoğlu held a series of security summits called the "National Security Summit" in Ankara to discuss the matter, Foreign Minister Mevlüt Çavuşoğlu has attended meetings in three countries to evaluate the current state of events in the Middle East and see where Turkey stands with regards to ISIS. Amongst those who attended the summit included Deputy Prime Minister Bülent Arınç, Interior Minister Efkan Ala, Defense Minister İsmet Yılmaz, Chief of General Staff General Necdet Özel, numerous generals and undersecretaries as well as the Chief of National Intelligence Organization Hakan Fidan.

The United States' recent announcement that they will carry a series of determined operations with NATO allies to end ISIS in the Middle East has increased diplomatic efforts while creating a tense environment. In response to these, Turkey has expressed that it cannot possible participate in such operations as the militant organization has 49 Turkish diplomats as hostage and to do so would threaten the lives of these diplomats. At the same time, the meeting has concluded that the emergence of ISIS was a direct cause of Bashar Al Assad's regime in Syria while stating that Turkey can play a 'passive' role to ensure that it does not risk the lives of kidnapped diplomats.

The National Security Mechanism Summits are expected to take place periodically every two weeks to discuss the latest situation in Iraq and Syria. A similar system of meetings will also take place where the government will hold meetings every two weeks for the reconciliation process.

Last week, Chuck Hagel, American Secretary of Defense came to Turkey to hold discussions with Turkish President Recep Tayyip Erdoğan, Prime Minister Ahmet Davutoğlu, Chief of General Staff General Necdet Özel and Defense Minister İsmet Yılmaz to figure out how much Turkey can contribute in the U.S.-led coalition against the increasing threat of ISIS. According to reports, Hagel was told that Turkey cannot be involved in direct attacks against ISIS as Turkey's diplomats are held as hostage by ISIS.