Erdoğan’s third presidential visit to be with regional ally Qatar 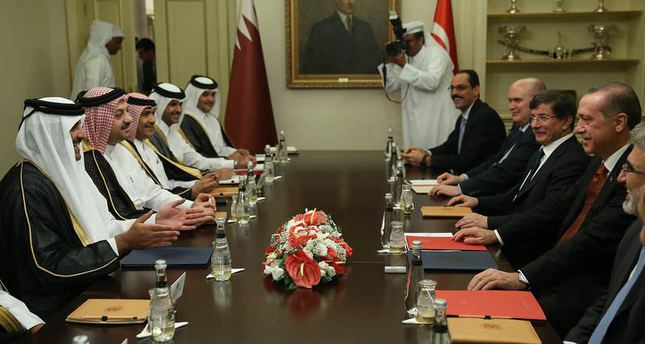 by Daily Sabah Sep 12, 2014 12:00 am
After becoming the first publicly elected president of the Republic of Turkey, Recep Tayyip Erdoğan is preparing for a diplomatic visit to Qatar on Sunday as the invitee of Qatari Emir Sheikh Tamim bin Hamad bin Khalifa Al Thani. Among the most significant allies of Turkey, Qatar will be the first country in the Middle East in which Erdoğan will visit, after he went to the Turkish Republic of Northern Cyprus [KKTC] and Azerbaijan at the beginning of September.

According to sources in the Presidential Office, Erdoğan will discuss the latest developments in the Middle East during the visit, especially the issue of the Islamic State of Iraq and al-Sham (ISIS) with the Qatari Emir. Erdoğan will return to Ankara on Monday evening, the sources said.

Regarding the visit, Turkish Foreign Minister Mevlüt Çavuşoğlu said that Erdoğan's visit to Qatar "reveals a 'brotherly relationship' between the two countries with both sharing common regional issues and a similar goal in working for peace and justice in the region."

Considering the latest incidents in the region as well as U.S. President Obama's course of action against ISIS and visits by U.S. Senior officials Chuck Hagel and John Kerry, Erdoğan's travel is salient. In fact, Erdoğan made his remarks about the escalating threat against the stability of the region during the NATO Security Summit that was held in Wales last week. "Against the havoc which threatens regional security and stability in Syria and Iraq, it is essential to take pertinacious steps with a holistic attitude," said Erdoğan during the summit.

During the Gaza offensive of Israel, the U.S. held meetings with Qatar and Turkey, the two countries that showed the strongest support to war-stricken Palestinians in Gaza.