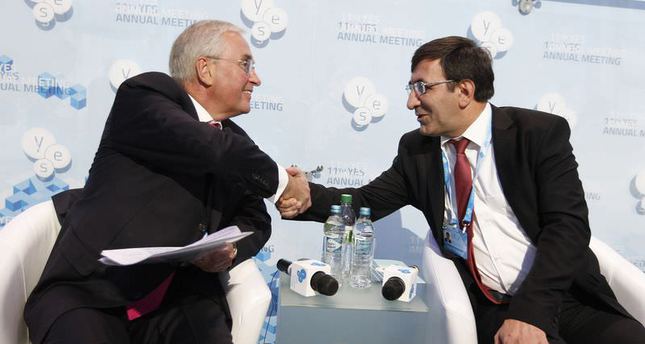 by AA Sep 13, 2014 12:00 am
Turkey's Development Minister Cevdet Yılmaz has reiterated that Turkey supports the unity of Ukraine and its territorial integrity, along with a peaceful and diplomatic solution to the crisis in the east of the country.

Following talks at the Turkish Embassy in Kiev on Saturday, which he visited on the sidelines of the 11th Yalta European Strategy meeting, Yılmaz said: "We stressed that Turkey prefers a solution to the crisis through peaceful and diplomatic means."

Yilmaz also met Mustafa Dzhemilev - the leader of the Crimean Tatars and deputy at the Ukrainian parliament - at the embassy.

He underlined Turkey's sensitivity towards Ukraine's Crimean Tatars, who make up roughly 13 percent of the Crimean peninsula which opted for annexation with Russia in a March 16 referendum.

"As a country holding EU accession talks, a strategic partner with Ukraine and similarly on good terms with Russia, we have been endeavoring to make a positive contribution to the process," he added.

Turkish minister maintained that Turkey was doing its best to protect the rights of Crimean Tatars in the restive country.

"The people of Ukraine have the right to make the final decision on the country's future. Everyone must respect that," he said.

Unrest in Ukraine's mostly Russian-speaking east has torn the region apart since April, when the Ukrainian army launched military operations in the provinces of Donetsk and Luhansk to restore government control, after pro-Russian separatists declared independence in the region.

Kiev government and pro-Russian rebels agreed to a cease-fire in the Belarusian capital of Minsk, on September 5, bringing a halt to a five-month conflict which has left more than 2,500 people killed, according to estimates by the United Nations.
Last Update: Sep 13, 2014 8:11 pm
RELATED TOPICS