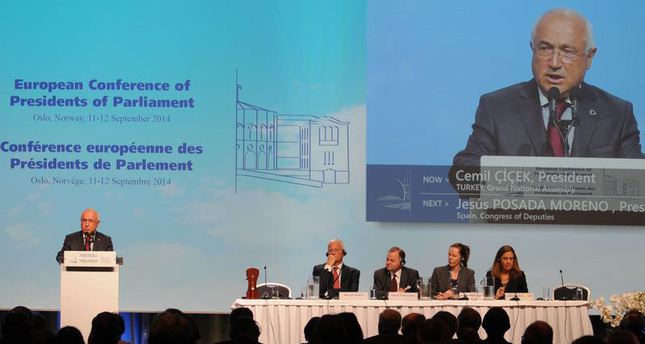 by Daily Sabah with AA Sep 13, 2014 12:00 am
The trouble-free passage of legislation in parliament depends on political maturity, constructive dialogue and mutual respect, Turkey's parliamentary speaker Cemil Çiçek has said.

Çiçek was speaking on Friday during a session of the Parliamentary Assembly of Council of Europe held in the Norwegian capital, Oslo.

"Constructive contribution of the opposition [parties] will enable transparency and legality for the legislative procedures conducted at parliaments," said Çiçek.

Stating that different segments of societies grab the chance of being represented in national parliaments, Çiçek described "opposition" as insurance and the "oxygen of democracy" if it sides with the government within democratic systems.

Government and opposition "are the two essentials that complete each other in democracies and the need to provide a strong balance in the relations between these two notions has always been discussed during history," added Çiçek.

Çiçek in his speech also raised concerns about the current state of events throughout the globe where there are a series of problems regarding terrorism, energy security, cyber attacks and illegal immigration as well as environmental issues. Stating that it is necessary for the international community to cooperate, Çiçek stated that Turkey aims for a foreign policy that focuses on humans and establishing stability.

On a different note, Çiçek expressed his concerns about increasing incidents of racism throughout Europe and stated that the situation was 'alarming'.

Around 60 parliament speakers and presidents gathered in Oslo on 11 and 12 September for a biennial parliamentary summit.

The Turkish speaker also held bilateral talks with his Italian, German and Norwegian counterparts as well as Baroness Frances D'Souza, the newly elected speaker of the U.K.'s House of Lords.