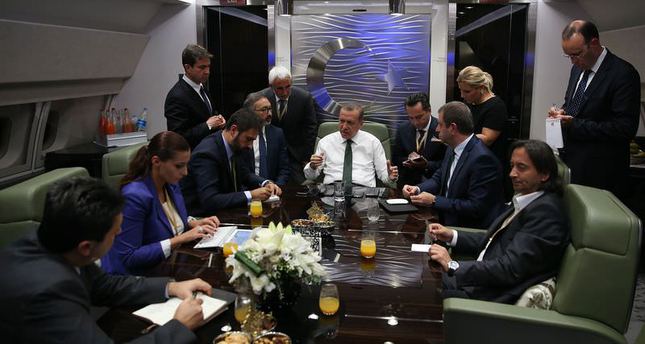 by Daily Sabah Sep 16, 2014 12:00 am
President Recep Tayyip Erdoğan on the way back from his Qatar trip has made compelling remarks on a wide range of issues including ISIS, the economy and exiled Muslim Brotherhood leaders and criticized credit rating agencies for their biased stance against Turkey.

With regards to the economy, Erdoğan stated that credit rating agencies base their evaluations with political motives rather than technical guidelines when they claim that Turkish economy is under risk. "Such claimes do not have an economic or solid basis" said Erdoğan, who stated that Turkey cut its relations with Standart and Poors in the past when it made such predictions. More importantly, Erdoğan stated that in the case that other agencies continue with such attitude, he would suggest Prime Minister Ahmet Davutoğlu cut Turkey's ties off with credit rating agencies. Likewise, he commented about the situation of Gülenist-linked Bank Asya and stated that citizens should be able to withdraw their money from the bank whenever they want to and if the bank fails to do this then the Banking Regulation and Supervision Agency (BDDK) should take certain steps.

"In the case that the exiled Muslim Brotherhood leaders seek refuge in Turkey, the government would evaluate their request and see if there are any impeding conditions to accept them" said Erdoğan, who stated that in the case that there are no impeding conditions then the MB leaders would be accepted by Turkey as any other foreign guest but he refused allegations that MB leaders are currently in Turkey.

In response to the New York Times' allegations that Turkey buys smuggled oil from the self-proclaimed Islamic State of Iraq and al-Sham (ISIS), Erdoğan stated that Turkey's stance is clear and the allegations are baseless. "The expression that Turkey buys oil from ISIS is extremely ugly and is a lie" said Erdoğan, who noted that Turkey is a country which is against all types of terrorist activities as it has suffered greatly due to the pains caused by terrorism. More importantly, he explained that any sort of oil acquired through unlawful means is immediately confiscated and destroyed by the government. For instance 5,000 tons of oil has recently been destroyed by the government and Turkey is extremely sensitive about such issues and it would not give the chance to those who want to take advantage of the chaotic situation in the Middle East. Erdoğan also stated that Turkey would not tolerate ISIS or other organizations that smuggle oil. He stated that he had talked with US Secretary of State John Kerry about the issue and expressed that he will not let instigators ruin Turkey-US relations. Likewise, he stated that the Turkish Armed forces are working on establishing a buffer zone along the Iraq and Syria border and will present it once it is prepared for approval.

Erdoğan stated that the Turkish intelligence organization is continuously working to bring back the 49 diplomats who had been kidnapped by the ISIS in the Iraqi city of Mosul three months ago and noted that Turkey has some opportunities which can be put into good use in this respect. "We are constantly in contact to resolve the issue" said Erdoğan, who expressed that Turkey is trying to resolve the matter without harming anyone.