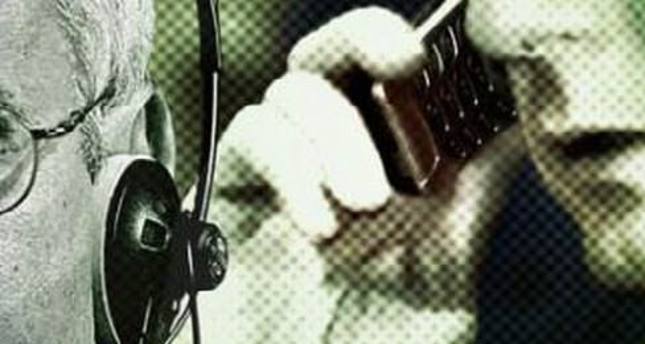 by Daily Sabah Sep 16, 2014 12:00 am
New reports reveal that Gülenist infiltrators began wiretapping encrypted state phones in September, roughly three months before the Dec.
17 operation - a Gülenist attempt to topple the elected government through their agents within the judiciary and police.

More details were found following an inspection at Turkey's Telecommunications Directorate (TİB) that revealed more dates and times including the frequency of the wiretapping.

The results following the inspection indicate that the wiretapping of encrypted state phones began in September and were intense during the month.
After a break, the wiretapping of top state officials began again in December shortly before the Dec. 17 operation was conducted.

According to the first possible interpretation of the findings, Gülenists began the operation in September, which could indicate the operation was planned long before and speeded up the wiretappings after the government's attitude toward shutting down prep schools became clear.

The second possibility is that the most frequent wiretappings took place in December, which could mean Gülenists took government officials' pulse over a possible operation.

The findings also disproved the defense of Gülen Movement-linked officers at TİB, who were detained as part of the operations carried out against them in which they were accused of spying. Gülenists, in their defense, had said there were no wiretappings of encrypted phones at TİB and that they were only once given a list of telephone numbers to be saved to the system by the new TİB head Cemalettin Çelik, who later asked them to delete the numbers from the system.

Previously, electronic serial numbers of encrypted phones belonging to then Prime Minister Recep Tayyip Erdoğan, Chief of General Staff Necdet Özel and MİT Undersecretary Hakan Fidan were discovered while trying to recover the digital database containing wiretapped recordings from TİB that were deleted following the revelations of the wiretapping scandal that have shaken Turkey.

When experts investigating the case were unable to determine the owners of the phones, the investigation deepened and found that the phones were used by MİT and the General Staff for coordinating domestic and foreign operations.

According to reports, a total of 304 separate wiretapping orders were issued for 76 encrypted phones, but more encrypted phones that might have been wiretapped may be found as the investigation continues.

Fethullah Gülen, who resides in the U.S. in self-imposed exile, leads the Gülen Movement, which has charter schools and organizations in hundreds of countries around the world. The movement is currently accused of attempting to infiltrate Turkish state institutions including the police and judiciary as well as unlawfully wiretapping thousands of journalists, politicians, top secret state meetings and encrypted phones belonging to government officials.

Prime Minister Ahmet Davutoğlu and Erdoğan have made it clear that infiltrators will be held accountable for their betrayal and attempting to take over the state through a coup. Currently, dozens of Gülenist agents within the police force have been arrested while more arrests are expected as police interrogate several other suspects and conduct an investigation into numerous institutions including the police department and TİB.
Last Update: Sep 16, 2014 1:39 am
RELATED TOPICS