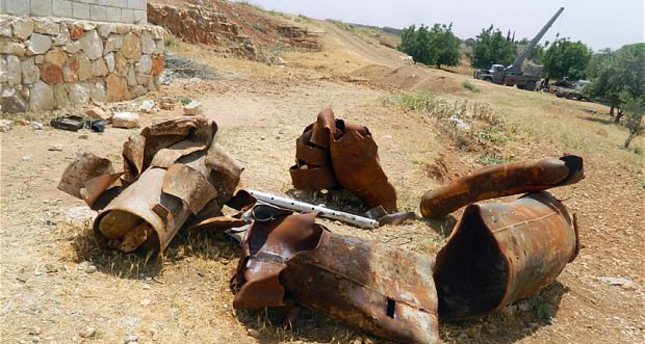 by Daily Sabah Sep 16, 2014 12:00 am
Despite neutralization of the Syrian regime's chemical stockpile by the U.S. in August of this year, Syrian government forces are continuing to use chemical weapons, specifically chlorine gas, against civilians according to an Organization for the Prohibition of Chemical Weapons (OPCW) report released on Sept. 10. Commenting on the report, Turkey called on the U.N. to take action over the "systematic and repeated" use of chlorine gas in Syria.

The Turkish Foreign Ministry said that the inhumane and cruel oppression of the Bashar al-Assad regime toward civilians took a new form with the recent OPCW findings. In a written statement, the Foreign Ministry announced that the Syrian regime's actions are a clear violation of U.N. Security Council (UNSC) Resolution 2118. Moreover, Turkey's Foreign Ministry said in a statement on Sunday urging the UNSC to take action, "The use of chlorine gas by the Syrian regime once again reveals the threat it poses to regional and international peace and stability."

Over the year, numerous reports have come from Syria about the use of chlorine gas on civilians by the Assad regime. The Syrian government's chemical attacks have intensified, particularly in northwestern Syria.

The OPCW also based its findings on reports from the northern part of Syria, in the villages of Talmanes, al- Tamanah and Kafr Zeta, which were targeted with chlorine gas. Although the Syrian government's chemical stockpiles have been destroyed, there is still chlorine gas because it is regarded as a weak toxic agent, and Syria was not obliged to announce its stockpiles of chlorine. Regarding this matter, U.S. Secretary of State John Kerry recently said that the neutralization of the chemical stockpiles had been completed; however, even the neutralization of chemical stockpiles did not end the concerns. "We also remain deeply concerned by reports of systematic use of chlorine gas in opposition areas," Kerry said last month.

A toxic chemical, almost certainly chlorine, was used "systematically and repeatedly" as a weapon in attacks on villages in northern Syria earlier this year, the global chemical weapons watchdog said last week.

The OPCW said that a report by a fact-finding mission it sent to Syria based its conclusion on dozens of interviews with victims, physicians, eyewitnesses and others. The report does not apportion blame for the chlorine attacks on three villages in northern Syria, OPCW spokesman Michael Luhan said.

Both sides in Syria's conflict blame one another for using chlorine, but dropping heavy explosives from helicopters is a tactic often blamed on Syrian government forces. Human Rights Watch said in May that it had strong evidence that in April this year Syrian army helicopters dropped bombs containing chlorine on the same rebel-held villages mentioned by the OPCW report.

The OPCW report blamed the chemical attacks for at least 13 deaths and dozens of injuries. The report said that witnesses described "a dense, honey wax-to-yellow hue towards the center of the cloud rising from the impact of the devices."

It said the descriptions led it to conclude, "with a high degree of confidence" that chlorine was the chemical used. An earlier report by the mission had said it likely was used as a weapon in Syria.

Chlorine is a toxic industrial gas that is not specifically classified as a chemical weapon.The attacks earlier this year came as Damascus and the OPCW were involved in a complex mission to remove Syria's stockpile of chemical weapons and precursor chemicals from the country. All of the poison gas, nerve agents and other chemicals declared by Syria have now been removed from the country and the most toxic parts of the arsenal destroyed. The OPCW said the fact finding mission would continue its work as there was "a spate of new allegations" of chlorine attacks in Syria in
August.
Last Update: Sep 16, 2014 11:25 am
RELATED TOPICS