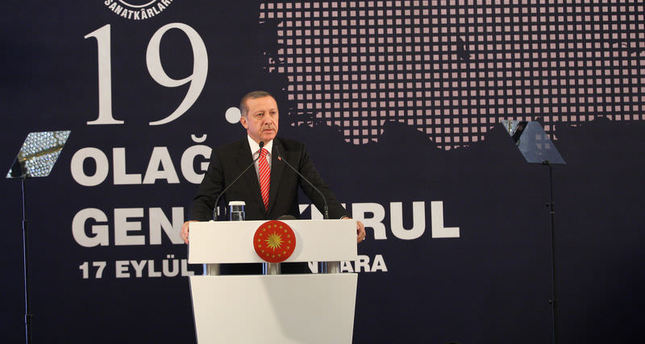 A New York Times report's assertion that Turkey had become a recruitment hub for the ISIS sparks a strong retort from President Erdoğan, who pointed to Turkey's determined fight against terrorism for over 30 years

Turkish President Recep Tayyip Erdoğan yesterday lambasted The New York Times (NYT) over its recent story claiming that Turkey has turned into a recruitment hub for the Islamic State of Iraq and al-Sham (ISIS) over the past years. The NYT allegations came on the same day that Erdoğan held a security summit with Turkey's senior officials at the Çankaya Presidential Palace. Reportedly, Wednesday's meeting focused on the latest developments in the region, including the ongoing ISIS crisis and Turkey's security situation.

Speaking at the Meeting of the Confederation of Turkish Tradesmen and Craftsmen ahead of the security summit, Erdoğan strictly dismissed allegations about Turkey's role in providing recruits for the militant organization. Referring to the NYT's recent article, Erdoğan stated that Turkey has fought terrorism for over 30 years and has suffered greatly. Erdoğan touched on the NYT's use of Erdoğan's photo outside the Hacı Bayram Mosque in Ankara and said some media outlets abroad are trying to depict Turkey as a country that supports terrorism.

Lashing out at the NYT's photo choice for the story, the president added, "An international newspaper used a photo yesterday, showing me [Erdoğan] and Mr. Prime Minister [Ahmet Davutoğlu] leaving the Hacı Bayram Mosque. They used this photo alongside a story about a terrorist organization [ISIS] by saying the organization recruits terrorists from the surrounding area of the mosque. To put it mildly, this is impertinence, sordidness, vileness."

The president underscored that Turkey has to be extra careful with regards to its attitude toward ISIS as they still hold 49 Turkish diplomats hostage in Mosul. "Those 49 people are of the utmost importance to us. We have to be careful when we make a comment [on ISIS] since we are responsible for their safety," said Erdoğan, urging all Turkish media outlets and political parties to display sensitivity toward the issue. He said that the attempts to depict Turkey as a supporter of ISIS is a cowardly act, as Turkey does not and would never buy oil from ISIS, ISIS militants do not receive treatment in Turkey and such allegations do not represent the truth at all.

The president stated that he will be going to New York on Sunday to attend the U.N. General Assembly and explain the situation to his counterparts to clear misconceptions, and expressed that Turkey will not allow such false news to damage its international image.

The U.S. and Turkey share an essential partnership as the U.S. continues to build an international coalition to beat back the Islamic State of Iraq and al-Sham, or ISIS, according to the State Department. "When it comes to Turkey, we share a partnership with them that's essential," deputy spokeswoman Marie Harf said while speaking to reporters. "They play a key role obviously in the region. And ISIS is a threat to Turkey's security. And they felt the ripple effect from this, quite frankly, more than most countries in the region."

Since the capture of the Iraqi city of Mosul by ISIS and a major increase in terrorist activities of the organization, Turkey has begun facing accusations by Western media that claim Turkey allowed ISIS militants and weapons to cross its border, a claim that has strongly been denied by the Turkish government.

In an editorial titled, "A Necessary Response to ISIS" published by the NYT in August, the daily claimed that Turkey allowed ISIS fighters and weapons to flow across its porous borders.

CNBC's David L. Philips recently wrote an article entitled, "Why is Turkey supporting Islamic State fighters in Iraq?" in which he accused President Recep Tayyip Erdoğan's son of providing funds to an aid organization that allegedly assisted ISIS. In his article, Philip claimed that Turkey's Humanitarian Relief Foundation (IHH) is supporting extremist groups in Turkey, but he did not show a source to back up his claim. He then furthered his allegation by saying that Erdoğan's son has ties with the IHH, and that one of its trucks was found with weapons heading for extremist groups in Syria, which the IHH vehemently denied.

Erdoğan's lawyer said the story has no grounds and is based entirely on false claims. Critics say that Western media turns a blind eye to the fact that Turkey has an open-door policy for warstricken Syrians, and that most of ISIS recruits are citizens of Western countries who can easily obtain Turkish visas.
Last Update: Sep 18, 2014 12:45 am
RELATED TOPICS