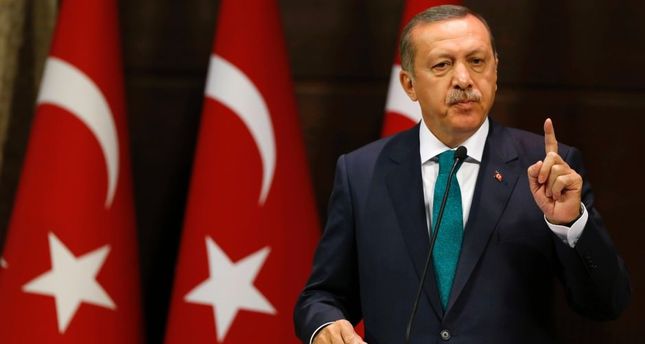 by AA Sep 17, 2014 12:00 am
Turkish president Recep Tayyip Erdoğan is set to address the U.N.General Assembly for the first time as head of state when the body's General Assembly opens next week. Erdoğan will address the Assembly at a morning session on Sept. 24, the opening day. The president, who was inaugurated as Turkey's head of state last month, is also expected to hold bilateral meetings with other leaders. One of the most important items on Turkey's agenda will be its candidacy for non-permanent membership of the U.N. Security Council for the 2015-2016 term, ahead of elections to the UNSC in October.

The 69th Regular Session of the U.N. General Assembly is scheduled to convene at the body's New York headquarters on Tuesday under the theme "Delivering on and Implementing a Transformative Post-2015 Development Agenda."

The first plenary meeting of the Assembly will be opened by Ugandan foreign minister Sam Kutesa, who was elected president of the General Assembly on June 11.

The General Debate's opening was postponed one day to next Wednesday, Sept. 24 to accommodate the Climate Summit as well as to make room for a World Conference on Indigenous Peoples, as well as a special session on population and development on Monday.

Secretary-General Ban Ki-moon will host the climate change summit on Tuesday, Sept. 23 with the aim of reaching a "high-level political commitment" on climate change, according to the U.N.

In other meetings next week, U.S. president Barack Obama is scheduled to convene a Security Council summit on Sept. 24 to draw attention to the Islamic State of Iraq and the Levant and foreign terrorist fighters. The UNSC is expected to vote on a draft resolution prepared by the U.S. to cut off funding to the terrorist group and to combat foreign fighters in Syria and Iraq. In addition, the Secretary-General announced a major meeting on Sept. 25 to focus on a much stronger global response to the Ebola crisis in West Africa.
Last Update: Sep 17, 2014 11:03 am
RELATED TOPICS