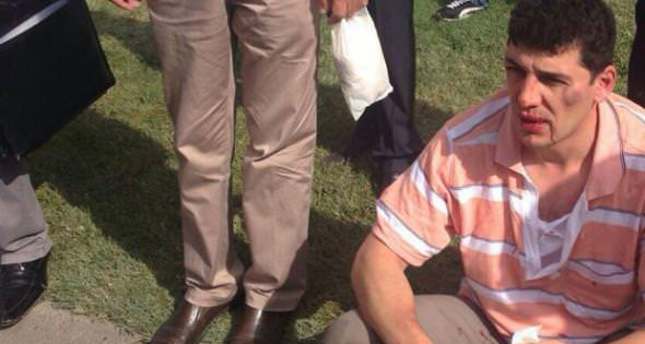 The best way to end the tension between Turkey and Kuwait, following a Kuwaiti diplomat's assault on an officer, would be for the accused to leave the country, says a Foreign Ministry official

A senior official from the Turkish Ministry of Foreign Affairs said that the best way to ease diplomatic tension between Turkey and Kuwait would be to withdraw the Kuwaiti diplomat who was involved in the quarrel.

Diplomatic tension between Turkey and Kuwait, two countries that have enjoyed a problem-free relationship for decades, escalated after a Turkish Air Force pilot was beaten by four Kuwaiti embassy staff last week while they had a quarrel in traffic. Eyewitnesses claimed four men stepped out of the Kuwaiti embassy car in which Emad al-Mohaid, an embassy attaché, was traveling and started beating a member of the Turkish Air Force, Lt. Col. Hakan Karakuş. Later, Kuwaiti Embassy officials were summoned to the ministry to provide an explanation and the Turkish Armed Forces also issued a statement that condemned the "heinous" attack on Karakuş. The statement included a thank-you to locals who intervened in the brawl. Diplomatic sources said that a diplomat who was involved in the brawl may be deported as "persona non grata" if found guilty.

The tension gained a new dimension after Kuwait Ambassador Abdullah Abdulaziz al-Duwaikh's statement. Speaking to Hurriyet Daily News on Sept. 15, the Kuwaiti ambassador said that deportation of the diplomat prior to a court ruling would negatively affect his country's investments in Turkey. "If anybody hears that this man is deported without court decision, then they will get afraid and leave Turkey because they won't trust Turkey after this incident. So it will affect everything," he said. Duwaikh's statement to the Turkish press was not welcomed by the Ministry of Foreign Affairs. According to a senior level official from the ministry, who spoke to Daily Sabah on the condition of anonymity, Duwaikh's statement to the Turkish press was unfortunate and it is nonsense to take this debate to the press. "I do not agree with the ambassador's saying Kuwaiti investors will pull their investments if this debate prolongs," said the official and added that declaring a diplomat as persona non grata is a political decision rather than being adjudged, unlike what Duwaikh said.

Turkish FMA official also stated that the problem is not that complicated to solve: "This problem might be solved very easily by their withdrawing the staff who got into the quarrel. In these cases, we withdraw our personnel in order to not to leave the local authority in a difficult situation. We practiced this custom several times in our ministry's history for some traffic accidents our diplomats were involved in," a senior official added. Turkey and Kuwait maintain good relations that have flourished in the past decade, especially in terms of Kuwaiti investment in Turkey and bilateral trade. Turkey and Kuwait recently agreed to raise their bilateral trade volume to $1 billion by 2016.
Last Update: Sep 17, 2014 1:07 am
RELATED TOPICS