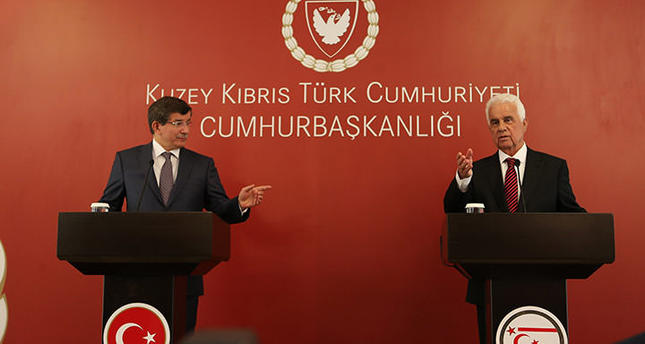 Turkish Prime Minister Ahmet Davutoğlu yesterday paid the first official visit of his term in office to Northern Cyprus in order for the Turkish state to show unity with Turkish Cypriots.

Addressing Greek Prime Minister Antonis Samaras, Davutoğlu called to build peace under the scope of the ongoing negotiations to set an example in peacemaking despite the current crisis and chaos in the region. The Turkish prime minister determinedly pointed out that Turkey will never leave Turkish Cypriots to their own fate. "The Cyprus issue is continuing for more than 50 years. We [Turkey] have stood by [Northern] Cyprus until now and we will continue to do so. What we want is to ensure peace on the island and show how peace dominates the southern Mediterranean. We held many talks with [Greek Cypriot President] Nikos Anastasiades to expedite [the process]."

Highlighting that delay in negotiations leads to a loss of time, Davutoğlu urged both sides to come to the table for negotiations over reunifying the island. "I call out to [both the north and south of the island]: Let's go to Southern [Cyprus] and drink a cup of tea, and return to Northern [Cyprus] together and be in peace again," said Davutoğlu to highlight the significance of peace on the island. "The visit has a symbolic significance to show Northern Cyprus' independency and Turkey's support to Turkish Cypriots on the island - we will altogether review the steps to be taken," Davutoğlu said at a press conference held at the Ankara Esenboğa Airport on Tuesday just before his departure. Davutoğlu said the main agenda of the visit is the ongoing negotiations between Northern Cyprus and Cyprus to ensure the reunification on the island.

The island of Cyprus has remained divided into Greek and Turkish parts since a Greek Cypriot coup was followed by a Turkish peace mission to aid Turkish Cypriots in the north in 1974. A de facto cease-fire has existed between the two parts since that date. The Greek and Turkish communities were asked in a 2004 referendum on reunification of the island based on the Annan Plan for Cyprus. Northern Cyprus voted in favor of reunification with 65 percent, but Greek Cyprus rejected the referendum by 76 percent.

The latest round of negations on the island started last February. Davutoğlu reiterated that there have been serious negotiations moderated by the U.N. for the last 40 years and added, "[The referendum] in 2014 was the utmost point ensured by Turkey and Northern Cyprus's positive attitude. Unfortunately, the crisis [over reunification] has continued to the present since Cyprus said 'no' to the U.N. plan."

Underscoring that the stalled reunification negotiations will gain new momentum with U.N. efforts and Turkey's intensive support, Davutoğlu said that he is to obtain detailed information on the issue during his bilateral talks with Northern Cyprus President Derviş Eroğlu. Davutoğlu reiterated that he visited the island many times during his tenure as foreign minister to enhance the talks between the sides on the island. Davutoğlu further added that support given to Northern Cyprus to ensure its development both economically and politically is also on the agenda of the visit.

Touching on the Northern Cyprus Water Project that is expected to carry fresh water to the island along with the energy through a pipeline under the city of Mersin, Davutoğlu said "Surely, we [Turkey] support Northern Cyprus with significant projects. The water project linking Northern Cyprus to Anatolia is the main one out of these projects. We will closely follow the developments."

Northern Cyprus has ensured a deeprooted democracy for the last 30 years on the island despite all preventions and oppression, said Davutoğlu.
The prime minister said he will hold talks with President Eroğlu, Parliament Speaker Sibel Siber, Prime Minister Özkan Yorgancıoğlu and leaders of all political parties before returning home in the evening.

In the previous days, Davutoğlu, in a press statement addressed the leaders of opposition parties and told them that President Recep Tayyip Erdoğan is outside of politics and that they should take Davutoğlu as the leading politician of the government rather than Erdoğan, get over their antagonistic political approach and replace it with a more tolerant and conciliatory attitude.
Last Update: Sep 17, 2014 2:41 pm
RELATED TOPICS