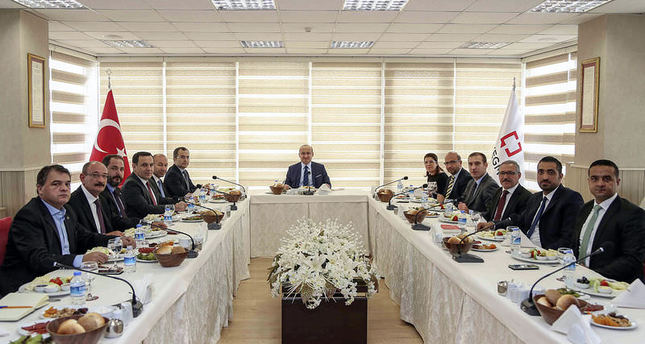 by Ali Ünal Sep 18, 2014 12:00 am
Speaking at a breakfast meeting yesterday with Ankara representatives of major news outlets, Deputy Prime Minister Yalçın Akdoğan said that the issue of a new constitution might come back to the agenda in the coming days. While he said that as the deputy prime minister in charge of relations with Parliament, he will come together with other parties' officials in a few days, indicating that the issue of a new constitution might be on the table in these meetings.

Saying that before terminating the activities of the Constitutional Conciliation Commission, which failed to draw a new constitution, there was compromise on 60 articles to be changed in the Constitution, Akdoğan pointed out that these 60 articles might be brought to Parliament for passing into law in the upcoming days. Akdoğan said, "Those reconciled 60 laws passing into law would revive the hopes for a new and civil constitution in public opinion," adding, "This would be a remarkable step."

Regarding questions about the claims from several Western media outlets of Turkey's support for terrorist groups, Akdoğan said that these are intentional actions to damage Turkey's public perception. "Our stance is crystal clear in that issue," Akdoğan said, adding that there have been similar claims in recent years: "There were several different attempts and claims to damage Turkey's reputation, we experienced this during the Taksim Gezi protest - they accused us with baseless claims like authoritarian tendencies and backing terrorist groups in Syria, some of these accusations targeted the Turkish government directly and some were used to repress Turkey in the international arena."

As for the question of whether there is polarization in the public, Akdoğan said that these debates turned into an urban legend. Remarking that Turkey's holding two important elections in the last eight months, a perception for polarization might be on the scene is a normal thing. However, Akdoğan said polarization in society did not reach the dimension that is claimed. "If those claims were true, we would see manifestations of it on the streets. However, no tension is reflected on the streets. That proves the polarization allegations are just urban legends," he said.

Akdoğan said one of the important problems facing Turkey is the opposition parties' incapability of developing positive policies. He also said that the current attitude of the opposition poses an obstacle to solving Turkey's problems and 2023 vision. "It is expected from Recep Tayyip Erdoğan to make a balcony speech after the presidential election, President Erdoğan started his presidential career by giving the desired speech that tried to embrace and understand every segment of society, however, we have a main opposition leader who did not congratulate his rival, who tried to insult a president who received 52 percent of the vote, and we have a main opposition leader who underlines that he will not have any contact with the president unless a state of war happened. This troubled approach is the main reason of social polarization that is claimed by the opposition that is created by us," he said.
Last Update: Sep 18, 2014 1:09 am
RELATED TOPICS