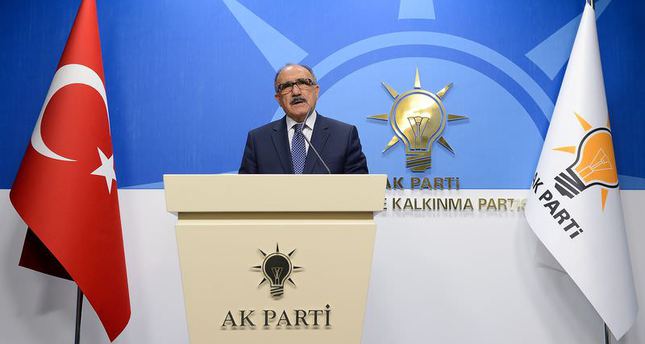 by Daily Sabah Sep 18, 2014 12:00 am
In a televised interview, the AK Party's Deputy Chairman and Spokesperson Beşir Atalay, commented on the current situation of the reconciliation process, saying that the process is not likely to be negatively affected by the ongoing conflict caused by the self-proclaimed Islamic State of Iraq and al-Sham (ISIS) in the region.

Considered to be one of the biggest threats to establishing peace in the Middle East, ISIS has also raised concerns about the viability of Turkey's reconciliation process as the PKK has openly expressed that they will not disarm while Western powers are sending arms and aid to Kurdish peshmerga fighters in Iraq. Evaluating the situation, Atalay stated that the reconciliation process is not dependent on ISIS.

"Conjectural changes have taken place in the region since the reconciliation process started and they had certain implications on the process," Atalay said, while also underscoring that he does not believe ISIS will negatively influence the reconciliation process because he sees it as a temporary issue that is expected to be handled by the coalition, as they have taken intense precautionary measures to ensure that ISIS does not advance. However, Atalay touched upon the fact that the issue of creating a buffer zone along Turkey's border is on the government's agenda and that the U.N. is also involved in this respect. More importantly, he stated that Turkey has previously requested to create a 910-kilometer-long buffer zone along its borders with Syria, but the U.N. refused the proposal despite serious concerns.

Touching upon the allegations that Turkey has become a transit hub for Europeans joining ISIS, Atalay has expressed that such allegations are unfounded and do not represent the truth while he condemned allegations that Turkey supports ISIS. "Turkey's stance regarding this matter is explicit and our policy regarding the issue of Syrian conflict has been the same since the beginning," Atalay said, who claimed that if Turkey's suggestions to support the moderate Syrian opposition forces were taken into consideration by the international community, the situation would have been different today. Atalay also claimed the rise of terrorism in Iraq and Syria was caused by the lack of intervention by international powers and the lack of order. Similarly, he touched upon Turkey's role in the coalition against ISIS and said that the international community is aware of Turkey's sensitivities due to the fact that ISIS holds 49 Turkish citizens as hostage in the Iraqi city of Mosul, but underscored that Turkey is ready to do whatever it can to contribute to the efforts.

In response to a question pertaining to recent attacks against schools in eastern Turkey and if they would pose a threat to the new stages of the reconciliation process that are soon to take place, Atalay stated that he does not believe such acts of provocation will affect the process. "The Kurds have openly expressed that they have been disturbed by the recent attacks and stated that they have difficulties in repressing these violent acts," Atalay said and pointed out that both sides are in favor of resolving the issue despite provocations. Furthermore, Atalay stated that Turkey has passed a law that enables the opening of foreign-language instruction schools in the country, but he emphasized that the law requires all institutions to apply to the Education Ministry, obtain necessary permits and follow legal procedures accordingly. Any attempts to unlawfully open such language schools without fulfilling legal procedures constitutes a violation of the law, regardless of their ethnic, religious, or sectarian affiliation Atalay said, and he claimed that such attempts try to create a stir and provoke people rather than taking advantage of the democratic grounds provided by the government.

Touching upon the embracing of the reconciliation process by the people, Atalay said they have fully accepted the process and it has become a priority for all citizens after economic well-being and prosperity. "[The] reconciliation process entails stopping the shedding of blood and saving people's lives," Atalay said, mentioning that everyone values the process for its ability to put an end to the decades-long conflict.

The reconciliation process initiated by the AK Party government began when a cease-fire was signed between the Turkish government and the PKK followed by a series of democratic reforms to improve the rights of Turkey's Kurdish population. It is reported that over 50 percent of the people throughout the country are in favor of it including Abdullah Öcalan, the PKK's founder who is currently serving a life sentence on the island of İmralı.