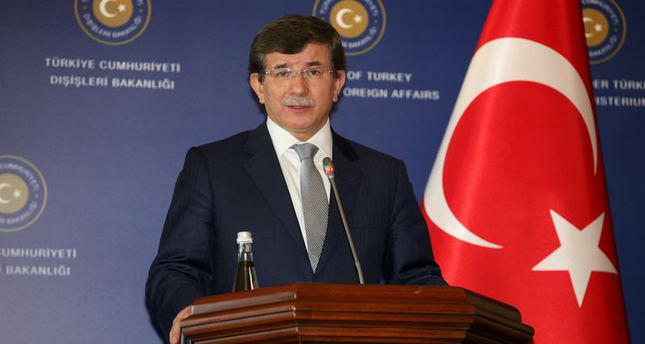 by Daily Sabah Sep 18, 2014 12:00 am
Prime Minister Ahmet Davutoğlu said that they have been warning U.S. officials about the threat of ISIS and their possible damage in Syria and Iraq for the last two years but their warnings were ignored. Davutoğlu emphasized that U.S officials are now embarrassed due to their indifference to Turkey's warnings.

Speaking to a group of journalist on the way back from his first official visit to the Turkish Republic of Northern Cyprus (KKTC), Prime Minister Davuoğlu said that they had been telling the Americans for two years what ISIS might do in Syria and Iraq and the severity of the threat. Davutoğlu said that Americans are embarrassed by their disregard of Turkey's warnings. "We have been telling Americans for two years that this would happen. They are very embarrassed about this issue. We said 'either we shall support the Free Syrian Army [FSA] by arms or declare a no-fly zone here.' In a sense, refraining from declaring a no-fly zone is what made ISIS this powerful." he said. "Jets from the Syrian regime bombarded the FSA because the regime was afraid of conducting a land war. Since the opposition groups were constrained in the area from Raqqa and Azaz, ISIS gained control there by benefiting from the regime's reluctance to enter the area on land."

Underscoring that a tactical coalition emerged between ISIS and the Syrian regime, Davutoğlu remarked that due to the U.S.'s reluctance to support the opposition groups in Syria, ISIS was able to rise and gain strength. He said: "We warned that if the FSA is not backed, because the regime carries a Nusayri/Alawite identity, all Sunnis would go to ISIS and become radicalized. Either a no-fly zone happens for opposition groups defending themselves or gives them heavy weaponry to fight. What is the situation now? FSA is weakened and ISIS won."