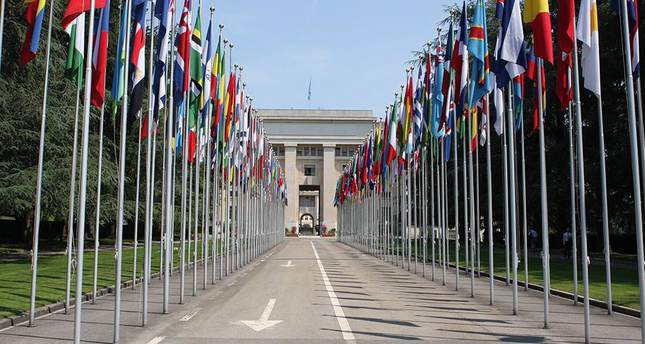 by Ali Ünal Sep 18, 2014 12:00 am
Turkey's demand to impose a buffer zone over some parts of Syria and Iraq to prevent the four-year humanitarian crisis in Syria from spilling over and confront the ISIS threat is expected to be discussed at the 69th session of the U.N. General Assembly. According to diplomatic sources the U.N. Security Council (UNSC) is likely to take on the decision.

Turkey, which neighbors Syria and Iraq, shares more than a 1,000-kilometer- long border with the two countries and is hosting more than 1.3 million Syrian refugees, has been called on several times by the U.S. and other members of the UNSC to enforce a buffer zone over Syria. However, Turkey's buffer zone demand has been ignored even after Damascus's use of chemical weapons on civilians last May. Debate on setting up a buffer zone over Turkey's southern border came back to the agenda after President Recep Tayyip Erdoğan's recent statement on Tuesday that Turkey's military is studying the prospect of establishing a buffer zone along its borders with Syria and Iraq amid the escalating threat posed by ISIS. Erdoğan also added that the government will evaluate the plans and decide whether such a move is necessary. Although Erdoğan gave no detail about the general staff 's efforts on the subject, several media outlets reported on Wednesday that a no-flight zone decision can be imposed after the U.N. General Assembly meeting that will be held next week. Turkish media outlets also claimed that the Turkish Armed Forces (TSK) are working on a buffer zone that aims to confront possible waves of migration that could result after U.S.-led coalition airstrikes on ISIS positions. An early draft from the TSK underlines the importance of control of airspace in the possible buffer zone and that the tomb of Suleiman Shah, which is accepted internationally as a Turkish enclave, could be included in the buffer zone.

Regarding this claim, sources from the presidency declined to comment that the tomb of Suleiman Shah will be included the buffer zone or not, however, sources said that U.S. and Turkish officials have reached a mutual understanding on Turkey's demand to impose a buffer zone and Turkish officials expect that the UNSC is likely to make this decision.

In addition, Erdoğan is set to address the U.N. General Assembly next Wednesday for the first time as president. Regional issues including the buffer zone over Syria and Iraq are expected to be discussed during his meetings with world leaders.

Meanwhile, the UNSC will assemble this Friday and evaluate the U.S.' plan for fighting ISIS with the U.S.-led anti-ISIS coalition expected to be discussed. State Department Deputy Spokeswoman Marie Harf told the press, "The Council session this Friday will also provide a platform for the international community to underscore its support for Iraq's new government as it responds to the threats from ISIS and the humanitarian situation."