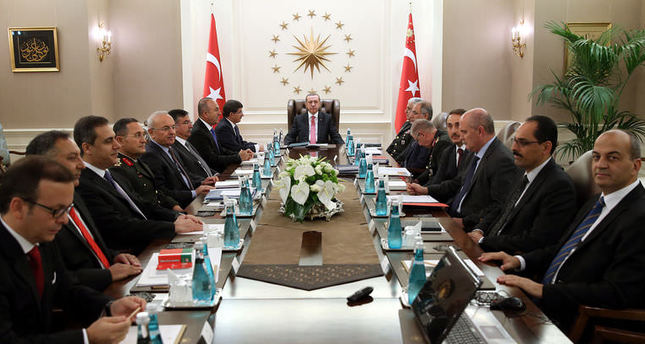 Comparing Gezi Park demonstrations, which began as sit-in demonstrations and grew into anti-government protests by many marginalized groups to incidents in Egypt, Ukraine and Syria, Erdoğan said that certain circles within and without the country supported those incidents to erode the government. "They killed the democracy in Egypt. The president [Mohammed Morsi] elected with 52 percent was ousted in a coup led by the person who was his defense minister [Abdel-Fattah el-Sissi]. Did countries being the core of democracy raise their voices? No.

Five-thousand people were killed in one day [in Egypt]. In Ukraine, hundreds of people lost their lives. The country came to the edge of division. Incidents [in Ukraine] started as if it was an innocent movement. Syria is already living the devastation. Nearly 250,000 people lost their lives. Six million people fled the country, 1.2 million of whom are in our country," Erdoğan said, highlighting that if Turkey had not continued its firm crackdown on Gezi Park protests, the country might have experienced the same as those countries.

Later in his speech, Erdoğan mentioned the Çarşı members' telephone conversation logs during the protests that read: "I don't give a damn about the department store or the trees in Gezi Park, the revolution has begun," and "We should assault the police fiercely, someone's death in the clashes might spark outrage in the public."

A day before the president's criticism of Gezi Park protesters, the prosecutor's office probe into Gezi park demonstrators was finalized and reportedly 36 suspects, including members of the Social Democrat Party (SDP) and Socialist Platform of the Oppressed (ESP), might be accused of attempting to topple the government during the protests.

Thirty-five members of Çarşı - Beşiktaş Football Club's fan group - including the group's leaders, are also facing charges of attempting to overthrow the government during the protests by carrying out a smear campaign against the government and provoking the public via social media and violent activities. Various Gezi indictments were prepared following the protests by prosecutors accusing some protestors of a coup attempt. Some of the protestors were arrested in June of last year but later released upon appeal pending trial.
Last Update: Sep 19, 2014 9:14 am
RELATED TOPICS