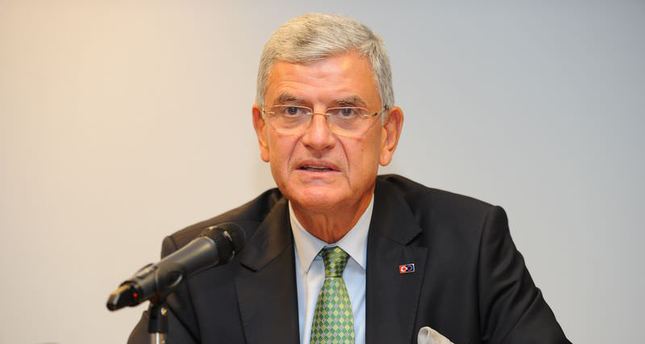 by AA Sep 19, 2014 12:00 am
Turkey's EU Minister and Chief Negotiator Volkan Bozkır has said that he is more confident about the future of Turkey-EU relations following his visit to Strasbourg and Brussels this week.

Bozkır's comments came after he met dozens of European diplomats and politicians during his four-day visit, including EU enlargement chief Stefan Fule, his upcoming successor Johannes Hahn, the European Commissioner for Regional Policy, and Martin Schulz, the President of the European Parliament.

He said: "For the past four years, no other EU minister has met with so many officials over the course of four days."

He said he saw the intensity of his visit and the response to it as a new initiative in itself, which had reinforced his hopes for a more favorable accession process and had "overcome differences in points of view between the two sides and supported the right picture for the future".

Bozkır had arrived in Strasbourg earlier in the week with a brief to accelerate EU accession talks before leaving for Brussels on Thursday in an effort to set out a strategy to accelerate the negotiation process.

Commenting after the Brussels meeting, EU's enlargement chief Stefan Fule said he was convinced that constructive cooperation between the EU and Turkey would continue.

The meeting with Fule - the first one since Bozkır was appointed to his current position - allowed both side an opportunity to exchange views on EU-Turkey relations as well as Turkey's accession process, including the progress report due on October 8.

Fule said in a statement: "Turkey is a key partner for the EU."

He hailed a "deepening of relations in all areas, including economy and trade, foreign policy dialogue, visa and migration policy and energy".

According to the statement, Bozkır and Fule agreed on the need to re-engage on the EU Positive agenda, with Fule expressing hope that, under the next EU Commissioner, Johannes Hahn, EU-Turkey relations would continue to develop in order to achieve their full potential for the benefit of both EU and Turkish citizens.

Fule also pledged objectivity on Turkey's progress, saying that the next progress report would be reflecting both positive and negative developments over the last year.

Bozkır told Anadolu Agency on Friday in reference to the press statement issued by the European Commission: "It is perhaps the most powerful statement released lately about the significance of the continuation of Turkey's accession process.

"That's why I am more confident about the future."

Regarding the EU's visa-waiver for Turkish nationals, which is not scheduled to come into force until at least 2016, Bozkir said: "The EC missions in Turkey have reached positive conclusions.

He said this was "significant" as the Commisson's reports were "vital for a visa waiver in three years", adding: "Every step of the process must be accurate."

Bozkır said Turkey would speed up the process and focus on introducing the agreement when it is finalized "as soon as possible".

Meanwhile, Turkey's New European Union Strategy was released on Thursday aiming to "boost the reform process and establishment of new communication channels between Turkey and the EU".

Bozkir said the new strategy had three legs: "Determination in the Political Reform Process, Continuity in Socioeconomic Transformation in the Accession Process and Effectiveness in Communication."

The political reform process focused on "further advancing the reforms of the last 12 years in the fields of rule of law, democratization, human rights, civilianization, freedom and security".

It was also aimed at "removing the imprints of Turkey's military coup in 1980" and sought a "continuation of the reform process in line with the EU acquis".

EU membership has been a hot topic on Turkey's agenda ever since accession negotiations began in 2005.

Turkey must comply with 35 chapters setting out reforms needed to become a member.

So far, only 14 have been accepted while 17 remain blocked and a further four are yet to be discussed.