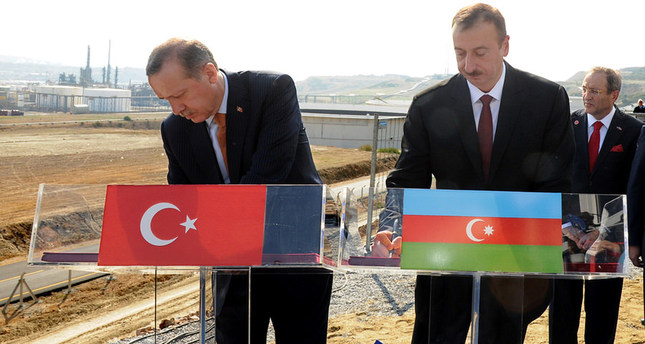 Turkey and Azerbaijan will work "shoulder to shoulder" to settle regional conflicts, PM Davutoglu said on his visit to Azerbaijan with the aim of furthering relations based on history, brotherhood and cooperation

Turkish Prime Minister Ahmet Davutoğlu on Friday paid his second visit abroad to Azerbaijan as prime minister to show solidary with "Turkey's sister country." Following a bilateral meeting with Azeri President İlham Aliyev, both leaders gave a joint press conference in the Azerbaijani capital Baku. Regarding the long-running Nagorno-Karabakh dispute, Davutoğlu said, "Turkey will stand by Azerbaijan's struggle until the last centimeter of its territory is liberated." Azerbaijan and Armenia, two former Soviet republics, fought a war between 1988 and 1994 over the disputed Nagorno-
Karabakh region, which is a de jure territory of Azerbaijan but remains under de facto Armenian control.

"Turkey and Azerbaijan will work shoulder to shoulder until the wider region is converted into a region of peace and requirements of international law are fulfilled," said Davutoğlu, pledging to continue to side with Azerbaijan until the dispute is solved in the region. Davutoğlu referred to the most recent clashes on the border of the disputed region in late July where 13 Azeri and Armenian soldiers were killed, according to Azerbaijan's Ministry of Defense. To emphasize the solidarity and the brotherhood between the two countries, Davutoğlu added that if Azerbaijan feels any pain, the same is felt in Turkey's heart. "When neighboring regions and the world are observed and two success stories are to be told, Turkey and Azerbaijan are the two success stories in the Middle East, Balkans, Caucasus and all of Eurasia," Davutoğlu claimed. Davutoğlu's comments come against a backdrop of renewed fighting between Azerbaijan and Armenia.

There have been sporadic outbreaks of violence along the border between Azerbaijan and the Nagorno-Karabakh region for decades but fighting intensified at the beginning of August. The last agreement for a peaceful settlement to the Nagorno-Karabakh conflict was signed in Moscow in 2008. Armenia and Azerbaijan originally signed a cease-fire in 1994 but never agreed to a peace settlement. The two countries currently do not have diplomatic relations.

Noting that Turkey and Azerbaijan will continue to support each other in international cooperation, Davutoğlu expressed his wishes that as Azerbaijan's U.N. Security Council (UNSC) membership ends with the upcoming UNSC election in October, Turkey will hopefully receive a non-permanent membership seat. "Wherever we [Turkey] see the Azerbaijani flag, we will be honored and we accept Azerbaijani success in all international platforms as if it was Turkey's success," said Davutoğlu, praising the country's international policies.

Davutoğlu further reiterated what he has said on his previous visits to Azerbaijan as foreign minister and said that during his time in the Prime Ministry, Azerbaijan will carry the same values for him and his government. Davutoğlu said that Turkey will continue to support Azerbaijan in the region and on the international platform with unity and each project that has started will be finalized with determination.

President Aliyev spoke of the Nagorno-Karabakh conflict affecting energy development in the region: "Armenia has been isolated from cooperation projects among regional countries because of its occupying attitude." "Our projects in the energy field are important, not only for our country, but for the world as well."

A groundbreaking ceremony for the high profile Trans Anatolian Natural Gas Pipeline project will be held on Saturday. Aliyev said, "Sept. 20 is a historic day for us. We had signed the project of the 20th century 20 years ago on Sept. 20 - we are starting the project of the 21st century in which Turkey and Azerbaijan have assumed a major role."
Last Update: Sep 21, 2014 2:42 pm
RELATED TOPICS