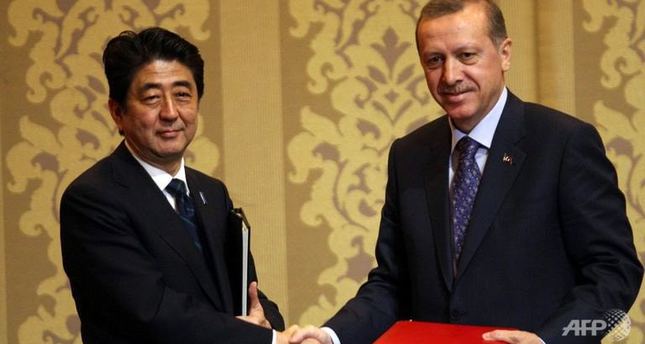 by Daily Sabah Sep 20, 2014 12:00 am
While Turkey and Japan celebrate the 90th anniversary of bilateral diplomatic relations, a joint symposium will be held, hosted by three institutions: the Embassy of Japan, Center for Strategic Research (SAM) and Center for Middle Eastern Strategic Studies (ORSAM). The joint symposium, "Japan and Turkey - Where did we come from? Where are we going?" will be held on Sept. 22 and Sept. 23 at the Ankara Hilton Hotel, and aims to expand dialogue in the diplomatic, cultural and business spheres to match the pace of accelerating bilateral relations.

At the symposium, the Diplomatic Seminar will be opened by Deputy Prime Minister Numan Kurtulmuş on Monday, Sept, 22. In the seminar, bilateral diplomatic ties will be examined and the participating panelists from both countries will discuss the potential for further cooperation in foreign and security policy.

Associate Professor Dr. Mesut Özcan, director of the Diplomacy Academy of the Ministry of Foreign Affairs of the Republic of Turkey, will give a keynote speech titled "Turkey on a Changing International System," and former Japanese ambassador to the U.N. Professor Shinichi Kitaoka, president of the International University of Japan, will give a keynote speech titled "Japan's Foreign and Security Policy in the 21st Century." The seminar will be moderated by Associate Professor Şaban Kardaş, the president of ORSAM. The Culture and Tourism Minister Ömer Çelik will open the Cultural Seminar on the second day of the symposium.

Prominent Japanese and Turkish scholars, together with the audience, will examine the sources of the sense of connection the Japanese and Turkish people share from various angles surrounding the two nations such as music, art, history, archeology and linguistics. Director of the Japanese Institute of Anatolian Archeology Dr. Sachihiro Omura will give a keynote speech.
Last Update: Sep 20, 2014 1:38 am
RELATED TOPICS