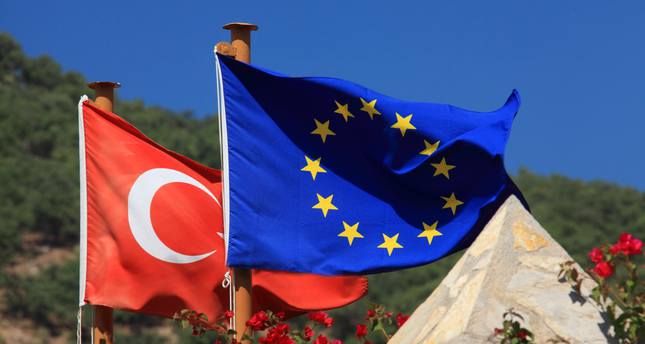 by Daily Sabah Sep 20, 2014 12:00 am
Turkey's EU Ministry has revealed its three-step strategy to revitalize its EU accession process. The strategy consists of the country's determination for political reform, continuity in socio-economic transformation during the process, and effectiveness in communication. The EU Ministry recently revealed a report about Turkish strategy for the EU for the upcoming years. In the report, the EU ministry presented their three-step strategy for securing EU accession in accordance with the 62-point Government Program. Reports underlined Turkey's three-step strategy as follows; political reform, socio-economic transformation and EU communication strategy. The EU ministry describes their new strategy as the "strategy that will lead to a boost in the reform process and establishment of new communication channels between Turkey and the EU."

The first step of the strategy for Turkey will be the political reform process in which Turkey intends to carry out the reformation process compliant with international law, zeitgeist social demands and, most importantly, in accordance with the New Turkey's pluralistic, liberal and participatory democracy goals, reports indicated. Moreover the most important element of the political reform process is the removal of the imprints of the 1980 military coup, presenting the need for a new constitution to realize the objectives emphasized in the report.

The report said: "Although fundamental laws and legislation have already been repealed or amended, all legislation bearing the imprints of the military coup of Sept. 12 will be reviewed in detail under the work for a new constitution…Hence, the systemic problems stemming from the current constitution which pose obstacles to a stronger democracy, fundamental rights and freedoms and rule of law, namely to the construction of the new Turkey, will be eliminated." The report also underlines the balance between security and freedom in the first part of their strategy.

Socio-Economic Transformation in the Process, as the report underlines, is required for the implantation of the political reformation process. "The sustainability and consolidation of this great change in Turkey requires not only proper implementation for the reformed legislation but also an accompanied change in mentality," said the report. Concordantly it is indicated that Turkey is experiencing an enormous transformation in every aspect of economic and social life; however the desired standard has not yet been reached for the reason that the continuation of socio-economic transformation and development in harmony with the political reformation process is crucial, according to the report.

Lastly, the report covers the issue of communication between EU and Turkey and the Turkish public, which is apparently seen as problematic. Consequently one of the main objectives of the new strategy is communication. A report that the EU ministry released underlines the three issue that need to be improved. The government aims to increase the support of the public by explaining that the EU the will modernize the democratization process, which is positive in every aspect of citizen life. State agencies will also engage in improving cooperation among public institutions, the private sector, local administrations, universities and civil society organizations for the sake of the solidification of every party's consent to EU integration.The communication strategy aims to reflect the true perceptions of Turkey to the EU and the international community with a proactive and perception-oriented approach.
RELATED TOPICS