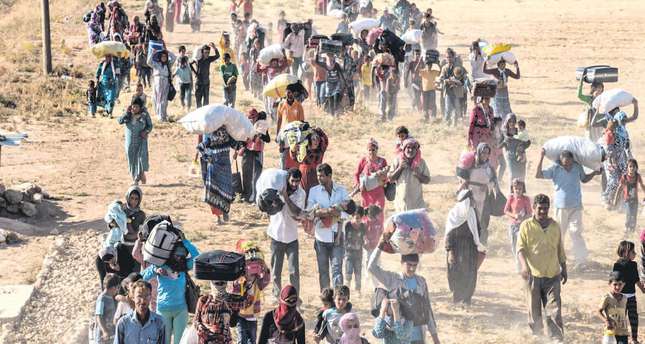 Thousands of Syrians who escaped ISIS terror and reached the Turkish border were allowed in yesterday as per Turkey's open door policy. Turkey is currently hosting around 1.5 million refugees

Thousands of exhausted Syrian refugees who fled from Islamic State of Iraq and al-Sham (ISIS) militants entered Turkey after security forces opened the gates in the southeastern Turkish city of Şanlıurfa on Friday afternoon. "We will take in our brothers fleeing to Anatolia from Syria or any other place without any ethnic or sectarian discrimination.

We have taken in 4,000 brothers. The number might increase. Their needs will be met. This is a humanitarian mission," Prime Minister Ahmet Davutoğlu said during his visit to Azerbaijan. "As long as Turkey remains strong and has a capacity, it will help everyone seeking refuge."

Local sources reported on Thursday that ISIS militants seized more than 21 villages with heavy weapons, which caused Syrian refugees to amass on the other side of the border amid massacres and kidnappings, while the fight between ISIS militants and Kurdish Democratic Union (PYD) forces escalated. Meanwhile, the increasing threat of ISIS and new refugee influx was discussed at the security meeting chaired by Davutoğlu on Thursday.

According to sources at the Prime Ministry, Turkey's possible attitude toward the Syrian crisis - with a special emphasis on border security, establishing a buffer zone and providing humanitarian aid - was discussed at the top level meeting. "Although we had warned the international community about the consequences of the instability in Iraq and Syria, the international community did not take necessary actions.

For that reason people affected by civil war in Syria run to safe havens in Turkey," Davutoğlu said after the meeting, and indicated that he instructed all the governors of provinces along the Turkish-Syrian border to provide humanitarian aid. "We're ready to help our brothers who are building up at the borders regardless of their ethnicity, religion or sect. But our priority is to deliver aid within Syria's borders," Davutoğlu added.

Ankara has been maintaining an open door policy since the Syrian crises began almost four years ago, and Turkey is already sheltering approximately 1.5 million Syrian refugees.

In order to provide effective humanitarian aid, Turkey has been pressing the U.S. and its allies in the U.N. Security Council (UNSC) to help Ankara establish a buffer zone along its border with Syria. However, Turkey's buffer zone demand was ignored even after Damascus's use of chemical weapons on civilians last May.

The Turkish National Security Council (MGK) gathered on Wednesday to evaluate the scope of the buffer zone and effects of the U.S.' airstrikes on ISIS before the UNSC assembles on Monday in New York City where it is expected to discuss the U.S.' plan for fighting ISIS militants in Syria and Iraq.

Commenting on the recent influx of refugees on the Syrian border, Doğan Eşkinat, the press secretary of Turkey's state-run Disaster and Emergency Management Authority's (AFAD), said that the organization has been alarmed for days as ISIS advanced in northern Syria. He added that AFAD had already sent enough tents to shelter around 20,000 refugees and that a sufficient amount of food aid was also sent to the area.

Turkish soldiers armed with rifles initially formed a line along the border to maintain security, but allowed residents of the Turkish village of Dikmetaş, 20 kilometers along the frontier from the Syrian city of Ayn al-Arab/ Kobane, to fling bottles of water and bags of bread across a barbed wire barrier to the crowd of Syrian Kurds. The soldiers later began escorting hundreds of mostly women and children laden with possessions into Turkey.
Machinegun fire and shelling could be heard from a few kilometers away, and one woman brought across the border was hospitalized after stepping on a landmine.

ISIS has made territorial gains in northern and eastern Syria in recent months in parallel with lightning offensives in northern Iraq that have led to the seizure of large swathes of territory. The U.S. is striving to build a broad international coalition to fight the terrorist group in Syria and Iraq. On Thursday, the U.S. Congress approved plans to arm and train moderate Syrian rebels fighting ISIS.
Last Update: Sep 21, 2014 2:41 pm
RELATED TOPICS