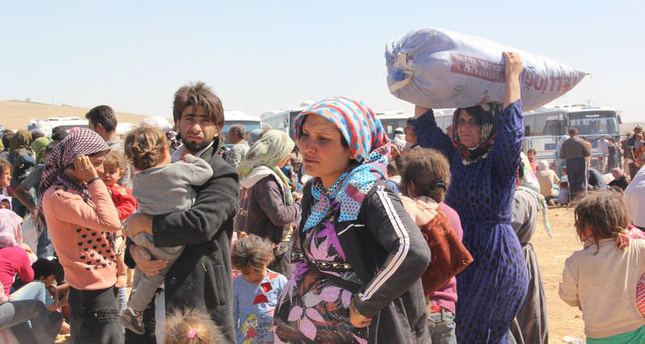 Over the past two days, Turkey opened its doors to nearly 100,000 Syrian refugees who have fled from the advance of ISIS, according to the Turkish Disaster and Emergency Management Presidency

Over the past two days, Turkey has welcomed 100,000 displaced Syrian Kurd refugees who have been crossing into Turkey from the north of Syria in order to flee an advance by the Islamic State of Iraq and al-Sham (ISIS) fighters, the head of the Turkish Disaster and Emergency Management Presidency (AFAD), Fuat Oktay, said. This flow is one of the biggest influx of refugees Turkey has received since the Syrian civil war started more than three years ago.

Turkey opened a stretch of its frontier along a 30-kilometer distance on Friday after Syrian Kurdish civilians fled their homes from the border town of Ayn al-Arab - known as Kobane in Kurdish - following clashes between ISIS militants and Kurdish forces that are affiliated with the Syrian Kurdish political party known as the Democratic Union Party (PYD).

The Syrian civilians seeking shelter from ISIS attacks on Kobane are being registered at the office of admissions that was set up by AFAD, following their entry from eight entrance points into Turkey. The number of refugees, around 45,000 people on Friday, increased to 65,000 on Saturday and rose to 100,000 on Sunday.

Turkey provides medical screening for the newly arrived refugees, Oktay said. Oktay listened to the refugee families' problems in the tent-camps and said that Turkey will provide them with humanitarian aid.

The institution of AFAD takes necessary measures for effective emergency management and civil protection nationwide in Turkey. "The deputy prime minister had announced the number of our [new] Syrian guests as 65,000, but this number rose to 100,000 as of today. We are continuing to open our doors within the same framework," Oktay said. ISIS's advances in northern Syria have prompted calls for help by the region's Kurds who fear an impending massacre in Kobane, which sits in a strategic position close to the Turkish border. Iraqi Kurdish leader Masoud Barzani called on Friday for international intervention to protect Kobane from ISIS's advance, saying the insurgents must be "hit and destroyed wherever they are."
ISIS militants, using heavy arms, have seized at least 64 villages around Kobane since the attacks started on Tuesday. The Syrian Observatory for Human Rights said that the militants slaughtered at least 11 civilians on Saturday, two of whom were boys. Ankara has been maintaining an open door policy since the Syrian crises began almost four years ago, and Turkey is already sheltering approximately 1.5 million Syrian refugees. In order to provide effective humanitarian aid, Turkey has been pressing the U.S. and its allies in the U.N. Security Council (UNSC) to help Ankara establish a buffer-zone along its border with Syria. However, Turkey's buffer-zone demand was ignored even after Damascus's use of chemical weapons on civilians last May. The Turkish National Security Council (MGK) gathered last week to evaluate the scope of the buffer-zone and effects of the U.S.' airstrikes on ISIS before the UNSC assembles on Monday in New York City where it is expected to discuss the U.S.' plan for fighting ISIS militants in Syria and Iraq.

According to many experts, the number of refugees will keep increasing unless stability is restored in the region. Various humanitarian aid foundations in Turkey have been providing refugees coming from Iraq and Syria with essential needs. ISIS has made territorial gains in northern and eastern Syria in recent months in line with lightning offensives in Northern Iraq that have led to the seizure of large swathes of territory. The U.S. is striving to build a broad international coalition to fight the terrorist group in Syria and Iraq. On Thursday, the U.S. Congress approved plans to arm and train moderate Syrian rebels fighting ISIS.