Turkey to extend authorization of mandate on Syria 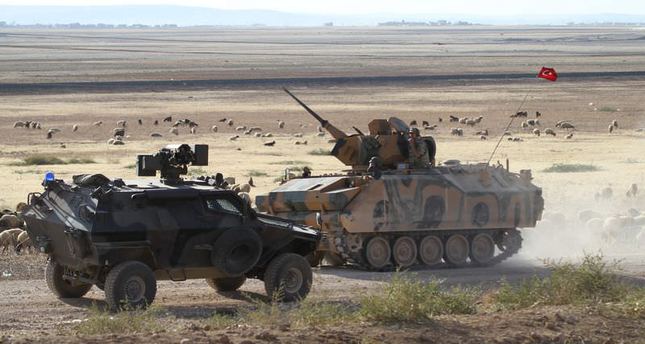 by Daily Sabah Sep 21, 2014 12:00 am
While Turkey welcomes another refugee influx, which consisted of nearly 60,000 people from Syria last week, Turkey's no-fly zone request is expected to be discussed in the ongoing United Nations General Assembly. In accordance with these developments, a bill, which aimed to the extend authorization of the deployment of Turkish troops in Syria, will be voted on in the Turkish Parliament on Oct. 2. There are several indications, including comments from Prime Minister Ahmet Davutoğlu, which show that the scope of the authorization of the deployment of Turkish troops will broaden because of Turkey's possible bufferzone strategy in Syria.

As civil wars in Iraq and Syria become intensified, the significance of the security of Turkish borders with those countries has increased. Aside from a massive wave of Syrian and Iraqi refugees who continue to arrive in Turkey and the increasing difficulty in sending humanitarian assistance to conflict areas, a possible buffer-zone along the Turkish-Syrian border has become a current issue for Ankara. Before his visit to Azerbaijan, Ahmet Davutoğlu commented on these issues to the press. "We call it secure zone instead of military buffer-zone because our aim is to provide shelter and living space under the umbrella of the U.N. to those people who suffer from conflict in the region. If we establish a buffer-zone in Syria close to Turkish borders, Syrian people will still feel at home, which would strengthen the opposition in Syria."

More importantly, Prime Minister Davutoğlu touched on the authorization of the deployment of Turkish troops in both Syria and Iraq as well as the possibility of widening the scope of the authorization of the the troops. "Authorization of the deployment of troops will be renewed. Their scope would also be changed because our perception of national security and threat have changed in accordance with the developments in the region. The Turkish Armed Forces (TSK) will do whatever necessary to ensure national security, and we as a government will provide them with the legal basis necessary to take precautions to react against all kinds of risks and threats," said Davutoğlu.