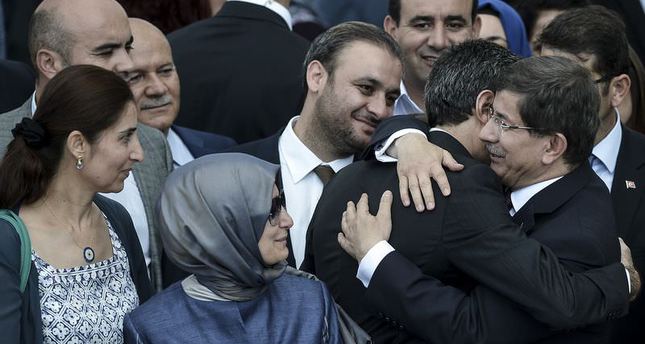 After 101 days of tense waiting, Turkish hostages held captive by ISIS insurgents in Mosul were freed after successful diplomatic negotiations with Sunni tribes in the region. Questions linger over how the release of the hostages will affect Turkey's position in the U.S.-led coalition against ISIS

As the 46 Turkish hostages held by Islamic State of Iraq and al-Sham (ISIS) insurgents in Iraq have been freed after diplomatic negotiations with Sunni tribes in southeastern Turkey, Syria and Iraq, President Recep Tayyip Erdogan said on Sunday that no ransom had been paid for their release. "There was no bargain for money at all, but only diplomatic and political negotiations. And this is a diplomatic victory," Erdogan told reporters before his departing to New York for a U.N. General Assembly meeting, adding that the National Intelligence Organization (MIT) conducted a "complete national" operation to free the hostages. Ultimate confidentiality and sensitivity was shown during the operation. Foreign Ministry sources also confirmed that the operation to rescue the hostages was a "national operation" conducted solely by the foreign branch of the MIT.

Officers from the foreign operations department of the MİT developed a strategy to rescue the 46 Turkish hostages after analyzing other ISIS kidnapping cases in Syria and Iraq, the source said. Using local assets on the ground in Mosul, unmanned reconnaissance drones and electronic communications, the MİT strategy proved successful at the beginning of July when a group of Turkish truck drivers held by ISIS for 23 days in Mosul was rescued.

The joyous reunion at Esenboğa Airport in Turkey's capital Ankara came as a huge relief when the hostages met their families in a flood of emotion after the confidential operation as the 46 Turkish consulate hostages, who were held by ISIS in Mosul, Iraq, were freed in an operation that was completed by the MİT early on Saturday. Prime Minister Ahmet Davutoğlu underscored that the release was the result of the Turkish intelligence's "own methods" and not a "point operation" involving special forces.

Addressing a large crowd gathered at the airport, Davutoğlu said the country was witnessing a remarkable moment as Turkish intelligence officers managed to retrieve the hostages through a successful operation. Regarding the day on which the hostages were freed, as a day of celebration, Davutoğlu thanked Consul Öztürk Yılmaz and other staff of the consulate for their patience and said they knew they were serving the nation during their period of captivity.

Turkey's main opposition Republican People's Party (CHP) leader Kemal Kılıçdaroğlu congratulated Davutoğlu with a phone call over the release of the hostages who were freed from the ISIS. Kılıçdaroğlu was quoted as saying, "I'm glad that our citizens could safely return to our country."
Davutoğlu reportedly accepted the Kılıçdaroğlu's commendation.

Turkey's Nationalist Movement Party (MHP) leader Devlet Bahçeli also welcomed the rescue of the 49 consulate staff who had been held for more than three months in Northern Iraq by the militants of ISIS. In a statement issued on Saturday, Bahçeli said militants unjustly, immorally and illegitimately held the Turkish nationals captive. The MHP leader also asserted that the government bargained with ISIS to rescue the Turkish hostages.

The released captives' reunion with their families witnessed emotional moments. Speaking to Turkish media outlets, the captives expressed their hopes that no one should ever face such a painful experience. One of the released captives, Alparslan Yel, said the Islamic militants "treated us a little better because we are Muslims. But we weren't that comfortable. There was a war continuing."

The hostages, including Turkey's consul- general, diplomats' children and special forces soldiers, were seized from the Turkish consulate in Mosul on June 11 during a lightning advance by ISIS insurgents. The group was held at eight different locations during their captivity, with their movements constantly followed by drones and other intelligence assets from the first day.

Up to six previous attempts had been made to secure the hostages' freedom but failed because of the fighting in Northern Iraq. The operation was delayed to Saturday until a pause in the fighting between ISIS and the Kurdish PYD near the Syrian border allowed the hostages to be taken out via Tal Abyad, an ISIS-controlled city in northern Syria and the Akçakale border crossing into Turkey.