Secretary Kerry to be personally engaged with Cyprus question 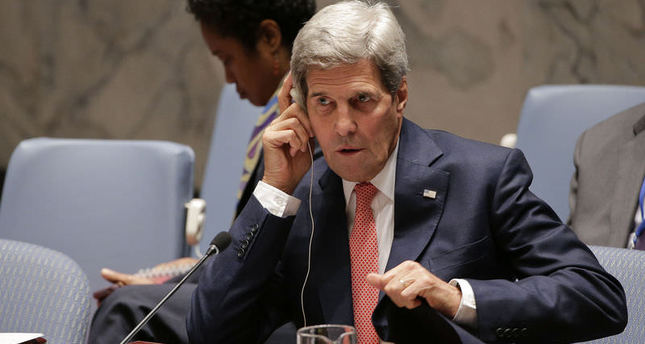 by Ragıp Soylu Sep 22, 2014 12:00 am
U.S. Secretary of State John Kerry intends to personally engage in the Cyprus negotiations and help push it forward, a senior American official said yesterday.

"He made clear that the subject of Cyprus and getting – and injecting new energy into the talks also came up on his recent trip to Ankara, and that we will remain very much engaged, including this week when there'll be a number of other meetings both with the parties and with Espen Barth Eide … We'll have a chance to see the Turkish Cypriots later in the week and engage [with them]," the official said.

The Obama administration recently ramped up its efforts for peace on the island as Vice President Joe Biden visited Cyprus in May and had several meetings with Turkish and Greek Cypriot leaders. Biden reiterated the United States' strong support for a settlement to reunify Cyprus as a bi-zonal, bi-communal federation with political equality, and continued calling on Turkish and Greek leaders various times to encourage the process. Turkey also urged the Obama administration to participate in the Cyprus negotiations as a deal broker to pressure the Greek side, which rejected a U.N.-mediated peace plan referendum with a majority in 2004 while the Turkish side voted for one.

Recently, the new Turkish Prime Minister Ahmet Davutoğlu visited the Turkish part of the island, which Greeks consider to be an "invaded zone," and called his counterpart in Greece to join him for a "tea party" on the Greek side of the Island to discuss the settlement process and reach a quick conclusion to fasten meetings. The spokesperson of the Greek Foreign Minister gave a cold shoulder to the offer and said that they will keep their policy within "international law" and a quick solution for the stalemate can only come by the change of current Turkish policy.

Regardless of this recent row between the parties, the United States is still "cautiously optimistic" because the sides are willing to see the start of real negotiations. "The secretary [Kerry] made that clear in his visit to Ankara; he felt that the Turkish side also wanted to see this issue resolved. We are cautiously optimistic that we have new life in this process, and we want to be supportive of that," the official concluded.