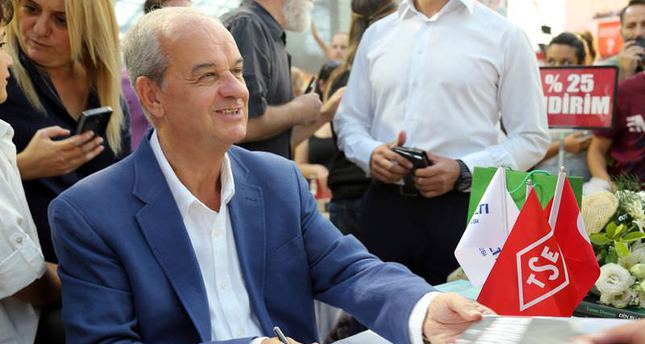 by Daily Sabah Sep 22, 2014 12:00 am
Turkish ex-general İlker Başbuğ who faced charges of "gang leadership" seeking to unseat the government by force, noted that Turkish Armed Forces (TSK) was a victim of conspiracy and asked for whoever was involved in that conspiracy to be put on trial.

Başbuğ attended the 5th book fair held in Antalya to introduce his book "Suçlamalara Karşı Gerçekler" (Facts Versus Accusations). Speaking during an interview with the participants of the fair and reporters, he said accusations targeting him were part of a conspiracy. Noting that the responsibility to unfold the conspiracy was the Turkish parliament's, he demanded an investigation commission be established in the parliament to find the ones involved in carrying out the conspiracy against him and TSK members.

The alleged conspiracy was reported in 2009 by the Turkish newspaper Taraf with links to the Gülen Movement, whose members enjoy a strong presence in the judiciary and police forces. The newspaper printed a photocopy of an alleged plan to damage the reputation of the government by portraying it as corrupt. Başbuğ had described the plan "as a piece of paper" that had no legitimacy and that it was a part of another psychological smear campaign against the military. Başbuğ was later sent to Istanbul's Silivri Prison where others suspected of belonging to the Ergenekon network were jailed.

Başbuğ was jailed for life in the Ergenekon coup trial pending appeal. Scores of army officers, journalists and lawyers were also imprisoned for their role in the alleged plot to topple the government.

"We will be re-trialled but what about the ones who set a plot against us? Will they be judged? They are the ones that should stand trial." Başbuğ said.

"The courts which claimed they represented the Turkish nation judged us as if we were enemies. It would have never occured to me that I would be a subject of such accusations." Başbuğ added.

He further stated that the defense of the suspects were restricted and disregarded by the court.

"Many people were unjustly kept in prison during that period. Their families suffered a lot by the imprisonment of these victims. Some lost their lives in prison. And some were reported to have committed suicide for being exposed to such severe slanders."

He said most of the Turkish people could see they were treated unjustly and believed in their innocence.

A lot of people reacted against the conviction of members of TSK, as their sentences were announced. Some have contended that the Ergenekon case was manipulated by prosecutors who were linked to the Gülen Movement. The lead prosecutor in the Ergenekon case was Zekeriya Öz who is believed to be affiliated with the controversial imam Fettulah Gülen.

"Of course we don't seek vengeance over the conspiracy we were victim of, but that does not mean we will give up tracing the case until the ones involved in that conspiracy account for their offenses." Başbuğ said.

Concluding his interview, Başbuğ expressed content over the attention his book received and said his book was not fiction but the truth as it is.

Başbuğ's book was published on Jan. 6, 2014 eliciting great interest. The book also has over 100,000 printed editions.