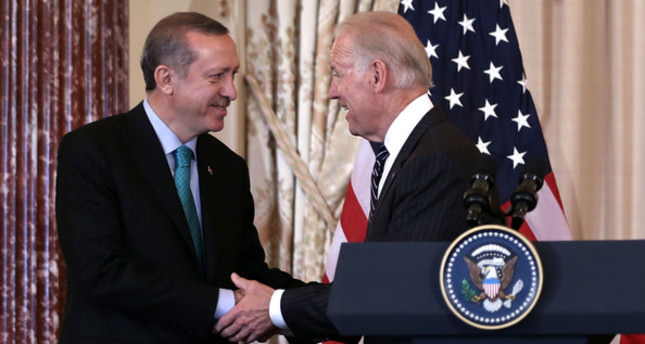 by Daily Sabah Sep 23, 2014 12:00 am
Turkish President Recep Tayyip Erdoğan arrived in New York on Monday to attend the 69th U.N. General Assembly for the first time as head of state. On the agenda for the Assembly were the latest global developments, including the growing Islamic State of Iraq and al-Sham (ISIS) threat and the Syrian refugee crisis in the region. During the Assembly, convened under the title of "Delivering on and Implementing a Transformative Post-
2015 Development Agenda," Erdoğan is expected to meet with U.S. Vice President Joe Biden and bring the refugee issue and the buffer-zone demand, which Turkey is looking to establish along its border with Syria, to the table.

Erdoğan is reportedly expected to urge international platforms to do their part with regards to the growing refugee influx, pointing out that any operation should not give a leg up to the al-Assad government. Turkey is faced with another obstacle on the buffer-zone issue, which Ankara hopes will strengthen the Syrian opposition, prevent militants from threatening Turkey and help deliver immediate humanitarian aid to civilians in the region.

Russia, as a UN Security Council member country, disagrees with Turkey's bufferzone demand. Together with the talks held over the past few months, Erdoğan, in his talks with Biden, will ask the Obama administration to step in to convince Russia.

Another subject to be discussed is Turkey's stance towards the U.S.-led coalition against ISIS. Erdoğan's talks with Biden have taken on extra importance following the recent release of the Turkish hostages kept in the hands of ISIS. Turkey has refrained from opining about its possible position in the U.S.-led coalition against ISIS so as to not put the hostages at risk. Following the release of the hostages, Erdoğan signaled that Turkey may change its stance towards the coalition. Turkey is ready to support combat, but still has certain reservations, according to sources.

Sources said that the experiences in Iraq and Libya have caused concern over unplanned air intervention, claiming it may not yield the expected return. Reportedly, Erdoğan will bring the civilian issue to the table, and said that air intervention and initiatives to get quick results could lead to significant civilian casualties and further deepen the crisis in the region.
Last Update: Sep 23, 2014 8:49 am
RELATED TOPICS