Released hostages share their experiences at the hands of ISIS 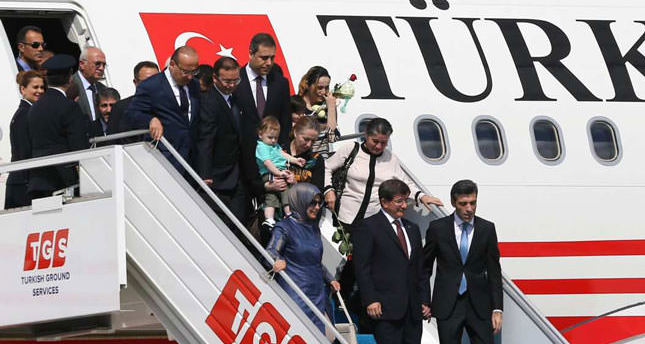 by Daily Sabah Sep 23, 2014 12:00 am
Forty-six Turkish hostages shared their harrowing experiences at the hands of the Islamic State of Iraq and al-Sham (ISIS) insurgents as ISIS continues to spread fear across the world with video of massacres and pictures of a mass slaughter that were posted across social media channels. The hostages' fond memories with their families and dreaming of being released to reunite with them again was what helped them get through their time in captivity. One of the released captives, special forces member Sait Coşkun, shared what he had been through while he was held hostage.
Coşkun said, "The occasion of an operation [to escape] aroused, but we did not put the children and women into jeopardy. We left our weapons to protect civilians. Otherwise, special forces members leave their weapons either with a command or when they die."

Underscoring that the civilian hostages were utmost important, Coşkun said the hostages saw hundreds of dead Iraqi soldiers and police when ISIS transferred them to other "secure" areas. "When a hostage who could speak Arabic asked why these corpses are on streets, the ISIS insurgents replied, 'They are blasphemers, so there is no need to bury them,' " said Coşkun.

On June 11, ISIS insurgents abducted 49 Turkish consulate staff members as it took control of Mosul, Iraq's second largest city. Since the consulate members' first day of captivity, a tense wait for the release of the staff continued. Early Saturday, Turkey breathed a sigh of relief when the hostages were freed after 101 days of being held captive by an operation executed solely by the Turkish National Intelligence Organization (MİT). Coşkun said that ISIS often transferred the hostages to other areas to protect the hostages from bombardment and to prevent a possible position fix. "We [the hostages] were always together and in Mosul. They [ISIS militants] never took us out of Mosul," said Coşkun, adding that they kept the captives in the basement to protect them from bombardments. Coşkun cited an ISIS member as saying, "We will not kill you, but al-Maliki [former Iraqi prime minister] tries to kill us, so we have to hide you."

The group was held in eight different locations, with their movements constantly followed by drones and other intelligence assets from the first day. Up to six previous attempts had been made to secure the hostages' freedom, but failed because of the fighting in Northern Iraq.

A contracted officer of the Turkish consulate in Mosul, 25-year-old Mesut Taşkıran, said that the children and babies were also taken as hostages, and said that the nutrition necessary for babies was not always delivered to the hostages. "They chained us while keeping us in the basement,"
Taşkıran said. The contracted officer said that some ISIS insurgents are fluent in English, Turkish and Arabic. Another former hostage, Alparslan Yel, said the Islamic militants "treated us a little better because we are Muslims. But we weren't that comfortable. There was a war continuing."

Speaking to a Turkish TV channel, Mosul's Turkish Consul General Öztürk Yılmaz, said the hostages managed to hide a cellphone from ISIS to communicate with Ankara since day one in captivity. Yılmaz said their captors made hostages watch the beheading videos of American and British citizens.

Alptekin Esirgün, one of the released captives, said, "Consul Yılmaz faced great difficulty. ISIS militants tried to force him to make a statement by putting a gun to his head on two or three occasions. Despite the situation he faced, the consul resisted and managed the process well."
Last Update: Sep 23, 2014 8:59 am
RELATED TOPICS