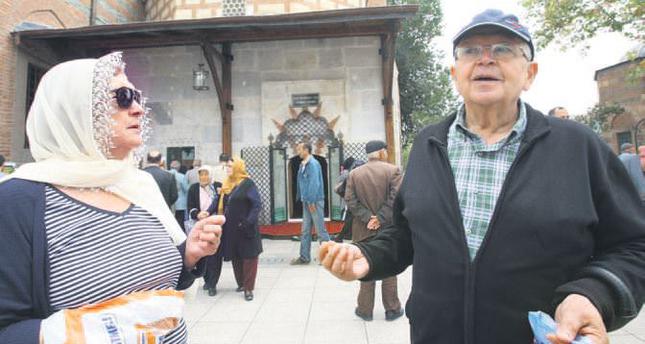 The correction issued by The New York Times on Sept. 17 for using a photo of President Recep Tayyip Erdoğan and Prime Minister Ahmet Davutoğlu greeting people in Hacı Bayram Mosque as part of an article on the Islamic State of Iraq and al-Sham (ISIS), have failed to calm the locals. In the article, it was claimed that ISIS militants are recruited from a nearby underground location. Used with the photo, the article implied that Turkey supported ISIS. The neighborhood residents of the Hacı Bayram area are indignant that the foreign newspaper report depicts their neighborhood as a place full of drug addicts, criminals, rapists and is associated with ISIS. Responding to the question whether the mosque is associated with ISIS terrorists or not, the imam of Hacı Bayram Mosque, Mehmet Ali, said that the allegations are quite offensive.

Even though The New York Times issued a correction on Sept. 17 after using of a photo of President Recep Tayyip Erdoğan and Prime Minister Ahmet Davutoğlu greeting people in Hacı Bayram Mosque, where according to the newspaper, Islamic State of Iraq and al-Sham (ISIS) militants are recruited from a nearby underground location, implying that Turkey supports the ISIS terrorist organization. The neighborhood residents of the Hacı Bayram area are indignant that the foreign report depicts their neighborhood as a place full of drug addicts, criminals, rapists and is associated with ISIS.

Responding to the question whether the historic mosque is associated with ISIS terrorists or not, the imam of Hacı Bayram Mosque, Mehmet Ali, said that the allegations are quite offensive. "It is sad to see that someone associated our mosque with terrorism, I am offended because of the allegations. I have not encountered anyone who supports, has joined or collects money for ISIS around Hacı Bayram." Mehmet Ali told Daily Sabah just after the afternoon prayer on Sunday, "Our community here consists of moderate people. I don't expect that they would be involved in any kind of extremism. Let me reiterate, I have not encountered or seen anything like that as it is reflected in the press." Arif Akbaş, headman of the Hacı Bayram neighborhood shared the same sentiments: "I refute that 30 young men joined ISIS, I found it soul shattering that journalist reflected circumstances here like young men joining ISIS in droves." Akbaş emphasized that there is no systematic recruitment by ISIS in the neighborhood.

Hacı Bayram-ı Veli was the founder of the Bayrami Sufi order. His quarters have been spreading affection, compassion, tolerance, goodwill and peace for decades. The area itself is a historical place including the tomb of Hacı Bayram-ı Veli and the Monumentum Ancyranum, the Temple of Augustus and Rome that was built between 25 B.C. and 20 B.C. and contains the most intact text recounting the deeds of Emperor Augustus on its walls. Therefore, the neighborhood is well protected by Ankara Municipality's security staff and the area also hosts book fairs and cultural festivals at certain time of the year, especially during Ramadan.

The periphery of the Hacı Bayram Mosque is surrounded with shops, tradesmen and artisans. Turan Göçer, who has heard about the article in The New York Times, has a barber shop nearby the mosque. When asked about the article he became furious and said, "We have worked here with honor, this is outrageous and a great lie […] I wish they would have asked me, I would tell them the truth. Shopkeepers and craftsmen around here are honest, friendly and outgoing. Look around can you see someone who would join a terrorist group?" Ahmet Damkalı, a peddler in the same area said that he thinks the news is a smear campaign toward Turkey. "Is it possible to recruit ISIS members in Hacı Bayram? Don't you live in Ankara? I ask you, is it possible? I have been here for 25 years and I don't see such a thing. There are more ISIS militants who have come from foreign countries than from Turkey. They tried to cover their inability to prevent ISIS recruitment in their countries by targeting us." Muhammed Şahin a shopkeeper mostly involved in selling scarves and topcoats for women said, "Those people see what they want to see, they try to depict Muslim people as evil, we are moderate people, we have nothing to do with terror or terrorists. They could not prevent their youth from joining extremist groups and blame us. Besides, there was restoration work in Hacı Bayram. There has already been a slowdown in business, and now this news. I hope our business will not be affected by these baseless allegations."
Last Update: Sep 23, 2014 1:40 am
RELATED TOPICS