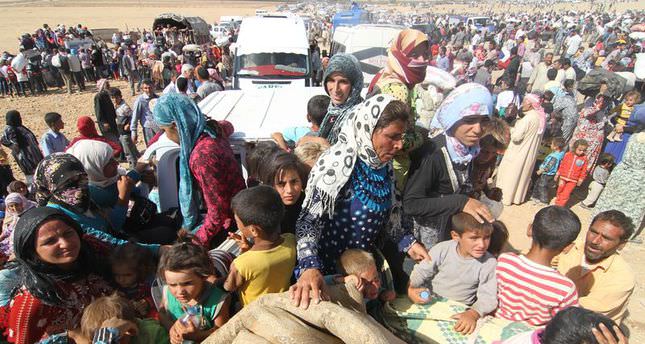 by AA Sep 23, 2014 12:00 am
The need for United Nations safe zones at the Syrian border is once again on Turkey's agenda as a new flood of refugees from Syria pour into the country amid attacks by ISIS militants.

The number of Syrian people fleeing to Turkey from the Kurdish city of Kobani had risen to 130,000 since Friday, Turkish officials said on Tuesday.

Both Turkish President Recep Tayyip Erdoğan and Prime Minister Ahmet Davutoglu have mentioned the importance of safe zones in recent remarks to the media.

Erdoğan mentioned the need for zones in a press conference just before leaving for New York on Sunday.

And in a televised interview on Monday night, Davutoğlu pointed out the increase in refugee flows triggered by U.S. airstrikes on ISIS targets in Iraq and Syria.

The prime minister said: "We found it would be more legitimate for Turkey to be part of the actions if a safe zone was built to ease the refugee burden on the country."

"Every airstrike can create a new refugee flow. We have to take precautions accordingly."

Turkey has requested safe zones in Syria since 2012 from the UN, but could not find the necessary international support.

Russia, the staunchest ally of the Syrian regime, has vetoed all draft proposals at the U.N. Security Council envisaging any military measures on the administration.

However, observers said that Russia may not veto this time, as the safe zones will aim to create protection from ISIS, also an enemy of the Syrian regime.

Also, no opposition from the regime of President Bashar al-Assad has been seen towards the U.S. attacks on Syrian territory against ISIS.

UN-built safe zones are aimed at protecting civilians in their territories, as has happened before in Bosnia and Iraq.

The security of safe zones, as laid out in the seventh Chapter of the U.N. Charter, is provided by multinational security forces from UN members.

The safe zones could be supported with buffer zones and no-fly zones if necessary.

In 1991, the UN established a safe zone in northern Iraq shortly after the first Gulf War to protect the Kurdish population.

In line with the Resolution 688 of the UN Security Council, a no-fly zone was established by the US' and French air forces with NATO's support.

Allied ground forces were tasked with ensuring peace in the region.

The international forces included the U.S., British, French, Australian and Dutch soldiers, while Turkey's Incirlik Air Base in Adana was used intensively during the operations.

The 58-day operation in northern Iraq was successful, and the safe zone continued to exist until the second Iraqi invasion of the U.S. in 2003.

Another example of the U.N. safe areas was in Bosnia, which were established in 1993 after Serbian ethnic cleansing carried out during the Bosnian War.

The war erupted after Bosnia's declaration of independence following the dissolution of Yugoslavia.

A total of 530,000 Bosnians fled to Europe, while 2.6 million others sought refuge in old Yugoslavian territories during the war and those who remained sought shelter at interior regions.

With several UN Security Council resolutions, safe zones were established in Zepa, Srebrenica, Tuzla, Sarajevo, Gorazde and Bihac regions in 1993 in the country and put under the protection of the UN army and NATO.
Last Update: Sep 24, 2014 10:33 am
RELATED TOPICS