Turkey is ready to do its part in the fight against global warming: President Erdoğan 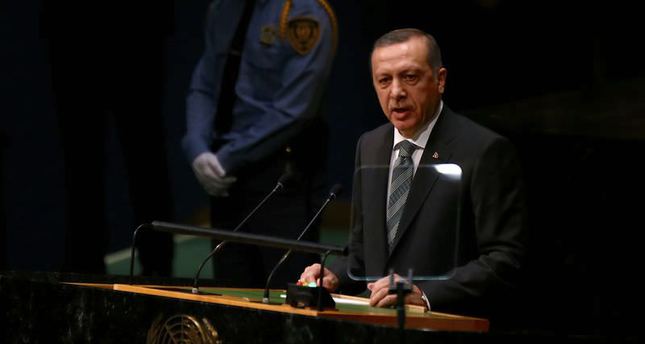 by AA Sep 23, 2014 12:00 am
Economic realities must be taken into account in any global agreement on tackling ever-threatening climate change, Turkey's President Recep Tayyip Erdoğan has said.

In a speech at the U.N. Climate Change Summit in New York on Tuesday, Erdoğan said Turkey was "ready to do its part" in the fight against global warming.

He said: "A new binding agreement should include certain flexibilities for countries, within the scope of common but differentiated responsibilities."

The president also emphasized that the rights of the least-developed countries should be protected in creating new policies, as they are not the cause of climate change, but the most-affected by its results.

"Developed countries should assume more responsibility in the fight with climate change, with regard to reducing carbon emissions and financial and technological support," Erdoğan added.

The treaty is expected to include new measures to limit the rise in global warming.

Mentioning Turkey's individual contributions in the fight against climate change, Erdoğan said Turkey had reduced its carbon emissions by 21 per cent between 1990 and 2012.

Erdoğan said Turkey is continuing its efforts within the scope of the 2011-2023 Climate Change Action Plan, aimed at increasing the share of renewable energy in total energy production to 30 per cent, and decreasing the size of energy in the economy by 20 per cent.
Last Update: Sep 24, 2014 10:49 am
RELATED TOPICS